Blanks produced by Schott will be polished by Safran-Reosc, cut into hexagons then final-polished by ion beam figuring. 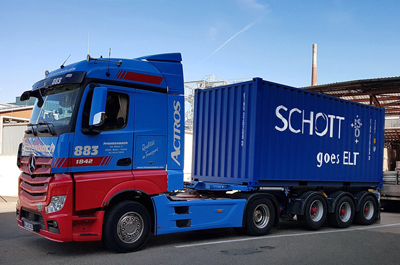 The first set of 18 blanks for the primary mirror of European Southern Observatory’s Extremely Large Telescope have arrived at Safran Reosc in Poitiers, France. The contracts for casting the blanks of the mirror segments, as well as polishing, mounting and testing them, were signed in 2017 with Schott and Safran Reosc, which is a subsidiary of Safran Electronics & Defense.

Before transportation, the mirror blanks were packed by six into a special wooden transport crate; six of these crates can fit inside a regular shipping container. Sophisticated shock sensors traveled with the blanks to measure any sudden acceleration or shock that could affect the blanks.

The shipping container with the first 18 blanks was sent from Schott in Mainz, Germany. The ELT mirror blanks are made of the low-expansion glass-ceramic Zerodur (see below) and are circular, measuring 1.5m across and about 50mm thick.

The back side of each blank is flat and the front surface is concave. The blanks come in three types with slightly differently shaped front surfaces, depending on the planned location of the segment in the primary mirror. The first primary mirror segments were cast by Schott in 2018.

Schott manufactures the blanks to the approximate shape so that Safran Reosc does not need to remove too much material during polishing. In the next stage, Safran Reosc will polish the blanks before they are cut into hexagons and receive a final precise polishing using Ion Beam Figuring. 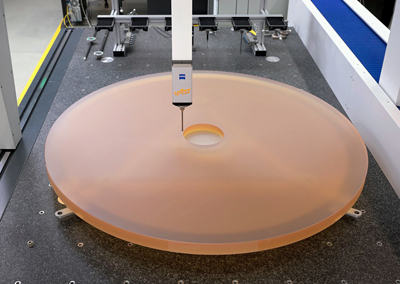 The first segment blank for Mirror 1 of the ELT.

When completed, the primary mirror will comprise 798 hexagonal segments and will have a total light-collecting area of 978 m2. In total, more than 900 segments will need to be cast and polished – including a spare set of 133 segments.

Once built the ELT will be the largest ground-based telescope in operation. The telescope is being built at Cerro Armazones in the Atacama Desert of northern Chile.

With a primary mirror almost 40m in diameter, the ELT will gather almost 100 million times more light than the human eye, which will allow scientists to tackle some of the biggest challenges in current astrophysics, such as the formation of the first stars, the assembly of the first galaxies, the characterisation of the atmospheres of Earth-like exoplanets, or the nature of dark matter and dark energy, among many other questions.

Zerodur was originally developed by Schott for astronomical telescopes in the late 1960s. It has an extremely low coefficient of thermal expansion, meaning that even in the case of large temperature fluctuations, the material does not expand.

Chemically, Zerodur is very resistant and can be polished to a high standard of finish. The reflective layer, made of aluminium or silver, is usually vaporised onto the extremely smooth surface shortly before a telescope is put into operation and is renewed at regular intervals afterwards.