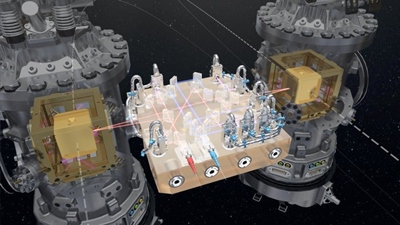 by Ford Burkhart in San Diego
In 2034, Europe and the world will be on the edge of a new era in astronomy when three spacecraft that will make up the Laser Interferometer Space Antenna (LISA) mission are launched by the European Space Agency (ESA).

An enthralled opening night audience at SPIE’s Optics + Photonics meeting in San Diego learned about the progress being made in what represents one of ESA’s most ambitious programs to date.

If all goes according to plan, the three LISA spacecraft working in harmony will give astronomers and astrophysicists an unprecedented look at some of the earliest events in the universe.

Uncharted territory
Martin Gehler, study manager at ESA’s technology center in the Netherlands for both LISA and the “JUICE” mission to explore Jupiter’s icy moons, walked his crowd through the deep challenges involved in what he called “multi-messenger astronomy”.

“It’s exciting,” he said. “We are working on something never done before. On the ground, yes. But never from outer space. We will be looking at things in an entirely different way. We want to access the early universe, going back to black holes colliding. This is uncharted territory.”

Even the three LISA spacecraft will be way, way out there: their mean distance from Earth will be 55-60 million kilometers, spaced out in a triangle to form interferometer “arms” measuring 2.5 million kilometers in length.

That huge arm length – terrestrial equivalents such as LIGO use arms around 2 kilometers long - means that LISA will be able to sense gravity waves at totally different frequencies than is possible on Earth, greatly widening the new astronomical “window” on the universe made possible by gravity-wave sensing.

“The first idea for this mission came out in the late 80s—when I was still in school!”

Test masses
To perform laser interferometry in space, the LISA mission will measure tiny changes in the distance between freely falling test masses, caused by “ripples” in space-time that are created by cosmic events like collisions between distant black holes or neutron stars, and supernovae.

“[From] the wave form of the change of distance, you can infer which type of events you have seen: a black hole, or two black holes colliding, or two neutron stars colliding,” Gehler explained.

With elaborate post-processing, the team will be able to match the patterns of those wave forms across the signals that are measured.

And while the terrestrial LIGO project typically records only one or two events each month, Gehler said that he expects LISA to detect many times more than that.

Selected in June 2017 as the third large-class mission in ESA’s “Cosmic Vision” program, the various elements of the LISA mission will be launched from Kourou, the former military site in French Guiana.

Its current timetable calls for a mission review in 2020, with official mission adoption expected in 2022, kick-off of the implementation phase in 2023, leading up to the envisaged 2034 launch.

Gehler said that ESA was eager to have individuals and groups apply for membership and join in what is, for both him and his photonics-focused audience in San Diego, very obviously exciting work.