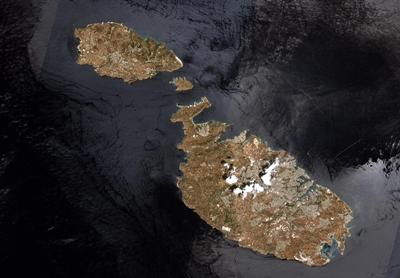 Using a ground-breaking laser delivery system, the European Space Agency (ESA) Copernicus mission has sent a strip of high-resolution satellite images of the Mediterranean to a relay satellite just moments after they were captured.

Collected by the low-Earth orbiting Sentinel-2B satellite, which is in the final stages of its commissioning period, optical images of the Bay of Naples and Malta were among those beamed to the geostationary Alphasat communications satellite from a distance of nearly 36,000 km.

The test data was then returned to a terrestrial receiving station via a more conventional radio-frequency downlink, but according to ESA still arrived within six minutes.

“This achievement is not only thanks to cutting-edge laser technology, but also the power of ESA’s partnerships with space industries and the European Union,” announced ESA.

Copernicus constellation
Launched on March 7 this year, Sentinel-2B is the latest in a constellation of satellites that together make up the Earth observation mission known collectively as “Copernicus”. Once fully commissioned, Sentinel-2B will join Sentinel-2A - its orbiting “twin”, always on the opposite side of the Earth - in returning a continuous, high-speed stream of high-resolution images for environmental monitoring.

The optical and multispectral imagery from the Sentinel-2 pairing is expected to prove invaluable for mapping agricultural practices and changes in land cover. It will also help to monitor forests, detect pollution in lakes and coastal waters, and contribute to disaster relief activity. “Many of these applications rely on imaging the same area in quick succession,” noted ESA. 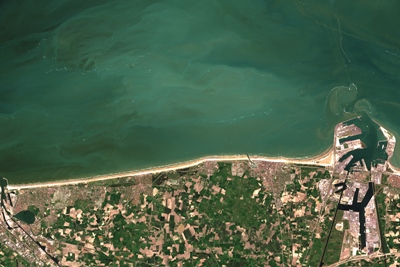 Algal bloom off the Belgian coast

Sentinel-2A has already returned some remarkable data, with its 13-channel multispectral imager providing the very first satellite views of algal “blooms” at the kind of resolution that is useful for scientists studying the phenomena.

As well as that high resolution, the two Copernicus Sentinel-2 satellites each offer a 290 km swath width, meaning that together they can image the entire globe every five days, and image Europe every two to three days.

At an LEO altitude of around 800 km, the twinned payloads are in a polar orbit and can only transmit data back to Earth directly when they pass over ground stations in Europe.

However, when information is needed more quickly, or continuously, the laser delivery system is ready to spring into action, and connect to geostationary satellites like Alphasat that are permanently located above their own ground stations.

Public-private partnership
Eric Monjoux, head of ESA’s Copernicus Ground Segment, said in a release from the agency: “EDRS has already increased delivery of Sentinel-1 data enormously and we can soon expect to see the same benefits for Sentinel-2 data.” 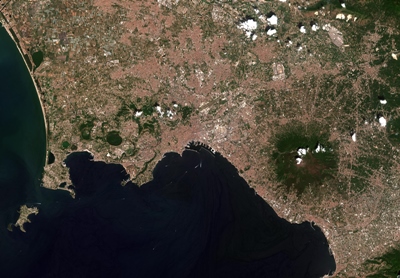 The Bay of Naples: as seen by Sentinel-2B

The EDRS program is the result of a €500 million public-private partnership between ESA and Airbus, with the first “node” of the network launched in early 2016 and used to relay data just a few months later. As well as transmitting data between satellites, it should eventually relay information from UAVs, surveillance aircraft and the International Space Station.

Among the photonics companies involved in Copernicus are the sensor manufacturers e2v technologies (now owned by Teledyne) and Sofradir.

ESA’s Sentinel-2 system manager, Omar Sy, described the laser link as “a bit like an optical fiber in the sky”, adding that once the commissioning of Sentinel-2B is complete, it will be possible to downlink huge amounts of optical imagery in a matter of moments when required.

Next year should see the launch of the Sentinel-3B satellite, which will pair up with the already-launched Sentinel-3A to capture images across 21 spectral bands, with a swath width of 1270 km and a ground resolution of 300 meters.