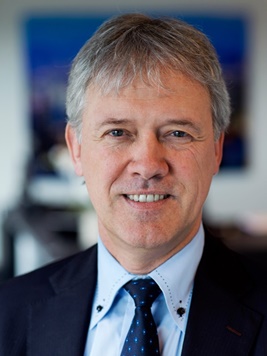 On track to deliver another record-breaking annual sales figure in 2016, the semiconductor lithography equipment giant ASML says that its sales team is currently in “deep discussions” with key customers on volume purchase orders for extreme UV (EUV) tools.

CEO Peter Wennink and colleagues reported quarterly sales of €1.82 billion in the latest financial period, meaning that Netherlands-based ASML’s revenues for 2016 so far are almost exactly level with last year.

But a strong close to the year, including some contribution relating to EUV system sales, should see total 2016 revenues reach around €6.65 billion, up from €6.29 billion in 2015.

Revenue recognition
In fact, sales in the September quarter were €80 million higher than expected, thanks to early recognition of revenue related to a single EUV tool. The NXE:3350 equipment costs around €95 million in total, with the balance of the sale to be paid when key performance goals are met.

And while the revenue relating to shipments of two other EUV systems has been delayed until early 2017, Wennink told an investor call that with orders for three NXE:3400 systems – higher-priced, production-level versions of the €95 million NXE:3350 development tools – received in the latest quarter, the new technology would start to have a “real impact” on ASML’s top-line sales in the new year.

Referring to ongoing “chatter” about the true viability of EUV in future semiconductor wafer production, Wennink reiterated the “unprecedented” problems faced by chip makers as they look to shrink feature sizes in their future devices, and that EUV represented the only solution.

Last week one of ASML’s key customers, the Taiwanese foundry operator TSMC, said that it expected to be using EUV in full, cost-effective chip manufacturing by 2020, in time for the ramp of its 5 nm “node” production.

The company has already been using four of ASML’s NXE:3350 tools fitted with a 125 W power laser-driven EUV source in its development of device processing for the 7 nm node, and according to an EE Times report is planning to install two of the NXE:3400 machines in early 2017.

Laser stability drives tool availability
Wennink and ASML’s CFO Wolfgang Nickl are still expecting to ship and recognize revenue for 12 EUV tools next year, doubling to 24 tools in 2018 and 48 tools in 2019 as the move to volume production takes full shape. Wennink told investors:

“We took orders for three NXE:3400 EUV systems in the [September] quarter. This means that six customers are now actively engaged in the EUV introduction, in both memory and logic.”

The CEO added that one of its machines had now demonstrated an average manufacturing throughput of 1500 wafers per day over three consecutive days, while seven EUV tools had shown an average “availability” in excess of 80 per cent over a period of four weeks.

That availability metric is crucial for cost-effective production, and one of ASML’s key targets is to get it above 90 per cent for all its machines. ASML says that this level has been achieved with one of its earlier NXE:3300B tools, but that consistency between different tools and sites still had to improve.

Wennink explained that the most significant factor in improving EUV tool availability was to ensure that the ultra-high-power carbon dioxide lasers used to drive the EUV-emitting plasma in the tool’s light source were sufficiently stable. Germany-based Trumpf is ASML’s key supplier in this regard, and the two firms are working together on the stability issue.

Purchase agreements under discussion
With system lead times on the order of six months, orders will soon start relating to the anticipated ramp to 24 production tools in 2018. ASML's CEO indicated that contracts relating to so-called “volume purchase agreements” similar to that agreed last year with key customer Intel were imminent.

“Our sales force is in deep discussions over volume purchase agreements as we speak,” Wennink said, adding that although technical challenges around mask blank inspection, pellicle transmission and actinic masks were all important, none represented a show-stopper. 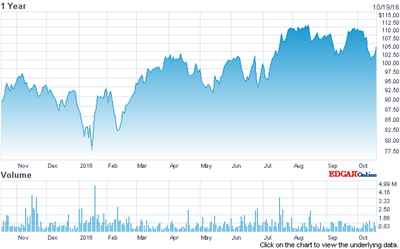 • Shortly after ASML announced the latest results, the Veldhoven firm’s stock price rose in value by around 2 per cent on the Nasdaq exchange, to trade at just over $104 – close to the yearly high reached in May 2016, and equivalent to a market capitalization of some $45 billion.

The company is set to outline its expectations and strategy for the next few years at an investor event taking place October 31 in New York, and could reveal more about the latest EUV developments then.