£8.7M equity investment for university spin-out, with additional series C funding expected by the end of the year. 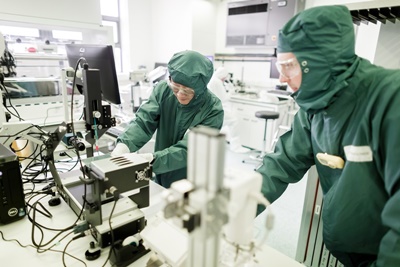 The University of Oxford spin-out firm Oxford Photovoltaics, which is pioneering the development of perovskite-based solar cells, says it has attracted another £8.7 million in equity funding.

Described as the “first portion” of a series C venture round, it brings total investment in the firm to €21.3 million over the past 18 months, with additional finance to close the latest round expected by the end of 2016.

Oxford PV is working to commercialize the progress made by key perovskite researcher Henry Snaith, and believes that applying a thin layer of the material to a conventional silicon solar cell will raise its power output by some 30 per cent.

“Perovskite has the potential to radically improve the efficiency of solar PV and meet the world’s energy demand into the future.

“Our technology has already demonstrated the efficiency and stability necessary to engage commercially with major industry players and become a key part of enhancing solar energy supply in years to come. This investment will support Oxford PV as we take large steps towards commercialization.”

More specifically, a portion of the new funding is said to have already been earmarked to assist development of a new demonstration line that will showcase the perovskite technology to potential manufacturing partners.

PV efficiency boost
Founded back in 2010 and originally working on solid-state dye-sensitized solar cell technology, Oxford PV subsequently switched its focus to perovskites, with Snaith and his research group regarded as one of the leading teams working on the potentially revolutionary technology.

According to the US National Renewable Energy Laboratory (NREL), the conversion efficiency of the best-performing perovskite cells has jumped from 14 per cent to more than 22 per cent in the space of just three years, with teams in Korea, Switzerland, Singapore and Israel – as well as at Oxford – among those driving the rapid progress.

On top of the fundamental material and cell research, a team at Hong Kong Polytechnic University claims to have produced a tandem perovskite-silicon solar module operating with an efficiency of 25.5 per cent, while at IMEC in Belgium a hybrid perovskite-CIGS design is thought to be capable of similar performance once optimized.

However, all of those developments relate to small-scale cells and modules, and the performance of the new technology at the kind of sizes needed for useful power generation remains to be demonstrated. On top of that, the best-performing perovskites tend to be based around lead atoms, while their water solubility means that stability and moisture protection are key concerns.

Back in 2014, Oxford PV’s CTO Chris Case told optics.org that he believed it would be possible to significantly boost the efficiency of either low- or high-performance silicon cells by adding a perovskite layer, for example raising device efficiency from 25 per cent to 29 per cent, without too much of an impact on production costs.

Oxford PV, which now employs 37 people, says it will achieve that by using a well-understood printing process to make the perovskite coatings in an extremely cost-effective manner.

Earlier this year the Lux Research analyst Tyler Ogden predicted that if stability and cost concerns can be overcome, commercial versions of perovskite cells could begin to appear by 2019.