Analyst report shows duo have cornered 80% of the market, largely thanks to Apple’s iPhones. 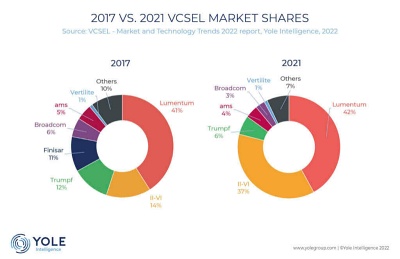 The market for vertical cavity surface-emitting lasers (VCSELs) is dominated by two companies with a combined market share of 80 per cent.

That’s according to the latest analysis from Yole Intelligence and sister company PISÉO, which estimates that the 2022 market for the devices will be worth $1.6 billion.

The total is almost entirely the result of deployments in short-range datacom links and Apple iPhones. Yole estimates that Lumentum is the market leader, with a share of 42 per cent, closely followed by Coherent (until recently II-VI) with 37 per cent.

Trumpf, which acquired the VCSEL expertise of Philips Photonics in 2019, sits a distant third with a 6 per cent share, followed by ams Osram with 4 per cent, and communications chip giant Broadcom with 3 per cent.

Those figures indicate that the leading duo have tightened their grip on the VCSEL market over the past five years, partly through acquisitions and partly thanks to close ties with Apple.

Market duopoly
“Since 2017, the VCSEL ecosystem has changed drastically,” reports Yole. “At that time, the market was an oligopoly, dominated mainly by Lumentum, though several other players had significant market shares.

“By 2022, the VCSEL ecosystem had changed and is now a duopoly. Lumentum and [Coherent, formerly II-VI] are now the largest players, with 80 per cent of the VCSEL market.”

Yole explains that Lumentum was the only supplier qualified by Apple five years ago, at which point Finisar was “struggling to qualify” products for the consumer electronics giant.

“These two players, Lumentum and [Coherent], are still the only players qualified by Apple for 3D sensing,” adds the analyst company, also pointing out that a series of acquisitions has reinforced their positions in the optical communications market, vertically integrating from the VCSEL device to the entire transceiver module.

Yole points out that although the VCSEL-based 3D sensing technology had initially been expected to proliferate beyond Apple and into Android phones, that has not really happened.

“In November 2017, Apple released the iPhone X embedding VCSELs for face recognition,” the report states. “This changed the game. In 2018, mobile and consumer became the largest market for VCSELs, reaching $440 million.

“Other smartphone makers soon joined this trend but then stopped using these components a few years later in favor of under-screen fingerprint sensors. Apple remains almost the only player integrating VCSELs.” 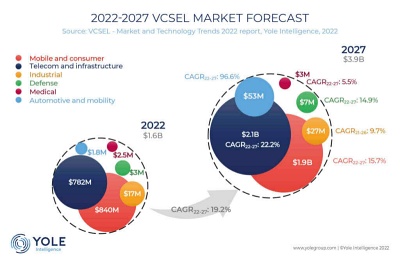 Automotive adoption grows
Yole estimates that smart phone and other consumer electronics applications will account for a $840 million market this year, with datacom use responsible for $782 million.

The next largest application area is industrial sensing, although this sub-sector is thought to be worth just $17 million currently, with even smaller shares for defense, medical, and automotive deployments.

That looks set to change a little over the next five years, with automotive applications of VCSELs predicted to double in value year-on-year, resulting in a $53 million sector by 2027.

But with Android phone makers seemingly unlikely to adopt the technology en masse, it is likely to be datacoms that will drive the greatest market growth in the near future.

“VCSEL revenues for datacom are expected to reach $2.1 billion in 2027, while VCSEL revenue for mobile and consumer could reach $1.7 billion,” the Yole team predicts, with overall compound annual growth of 20 per cent set to deliver a total VCSEL market approaching $4 billion by the end of the forecast period.

Yole points out that in May this year key epiwafer foundry IQE announced commercial availability of the first 200 mm-diameter VCSEL wafer, something that would enable compatibility with high-volume silicon semiconductor manufacturing processes.

“These new wafers may not be needed to answer a sudden rise in VCSEL demand but to make possible the integration of photonics devices with CMOS technology,” Yole said. “It also gives a potential roadmap toward [300 mm-diameter] wafer manufacturing in the long term.”

The other significant change in the next few years is expected to be a shift to longer-wavelength emission at 1380 nm, made possible through the adoption of so-called “dilute nitride” active semiconductor layers.

“This shift is needed to enable the integration of VCSELs behind organic LED displays, which are transparent at this wavelength,” explains Yole’s Pierrick Boulay.

He points out that Apple’s new iPhone 14 Pro, revealed earlier this month, features a proximity sensor embedded under the display.

“It could use a laser diode and indium gallium arsenide photodetector based on [an] indium phosphide substrate waiting [for] dilute nitride technology VCSELs to be ready,” Boulay suggests.

“As expected, the first long-wavelength application is a proximity sensor under the display, reducing the notch size on iPhones. Further 3D sensing applications could happen later.”

One point to note is that the fabrication process required for dilute nitride VCSEL production is significantly more complicated than for regular VCSELs, with both metal-organic chemical vapor deposition (MOCVD) and molecular beam epitaxy (MBE) equipment needed to deposit the critical compound semiconductor layers.