World's most valuable company has earmarked $390 million to help make the optoelectronics company's Texas fab the 'VCSEL capital of the US'. 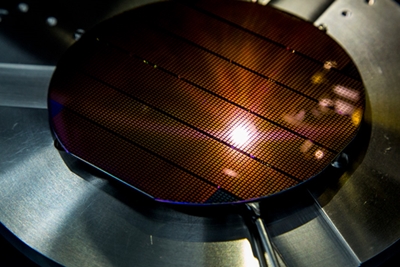 Less than a week after the US-based optoelectronic component maker Finisar said that it had bought a large semiconductor wafer fabrication facility to ramp VCSEL production, key customer Apple has revealed that it is supporting the move with $390 million from its “advanced manufacturing fund”.

Sunnyvale-based Finisar, which will be among more than 1000 companies taking part in the Photonics West exhibition in San Francisco next month, stressed that the deal is not in the form of debt or equity finance – as some initial reports have suggested – and instead represented “anticipated future business” between the two firms.

While some have suggested that the delayed launch of the iPhone X was at least in part due to the availability of VCSEL arrays, the apparent popularity of those new features has since fuelled speculation that Apple intends to incorporate the components into all of the new designs that it plans to launch next year.

More powerful versions of the VCSEL arrays may also be used in the lidar systems required for future self-driving cars – another technology area with which Apple has been heavily linked.

Although it had been widely speculated that Apple has been sourcing the arrays from Finisar and its rival Lumentum, until now non-disclosure agreements with the various VCSEL producers has prevented any of those suppliers from commenting on Apple’s activity directly.

During a quarterly investor conference call last week, Finisar’s CEO Jerry Rawls refused to be drawn on whether the company’s increasing VCSEL output was destined for Apple, or if the phone maker had qualified its components, citing “non-disclosure obligations” that Apple is well-known for using.

Finisar already makes millions of VCSELs at its Allen, Texas, facility, but its acquisition of the old silicon fab in nearby Sherman will increase that capacity dramatically. While the Allen fab uses a 4-inch wafer production process, a new state-of-the-art 6-inch process will be ramped next year at the 700,000 square-foot Sherman site.

500 new jobs
Apple said in a feature posted on its own web site that it hoped the support would transform both the Sherman site, which has been idle since 2012 when previous owner Texas Instruments mothballed the facility, and the local area.

“The 700,000-square-foot plant expects to begin shipping in the second half of 2018, and its output will make Sherman the VCSEL capital of the US,” Apple predicted, adding that Finisar is set to create around 500 high-skilled jobs at the site.

“One hundred percent of the VCSELs sold to Apple from Finisar will be made in Texas,” Apple added. “Consistent with Apple’s commitment to the environment, the company intends to procure enough renewable energy to cover all of its Apple manufacturing in the US.”

The announcement explains why Finisar is happy to invest upwards of $100 million in the Sherman fab acquisition and fit-out; something that at least one equity analyst had questioned the wisdom of during last week’s investor call.

Finisar’s CFO Kurt Adzema had responded at the time: “We obviously have some confidence based on our interactions with a variety of customers in both consumer and automotive [markets] that this is going to be a very important space for us. We feel very good about our relative position in this space, and that’s why we’re making the investment.”

Any lingering concerns that investors may have had appeared to evaporate quickly following the Apple announcement, with Finisar’s stock price immediately soaring in value by close to 23 per cent on the Nasdaq exchange.