Analyst report suggests that ‘continuously evolving’ market will be worth $2.4 BN globally in 2026. 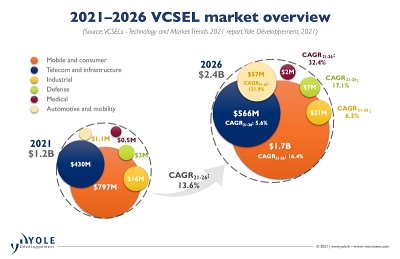 That’s according to the France-based analyst company Yole Développement, which estimates the sector to be worth $1.2 billion currently.

3D sensing applications in mobile phones and other consumer goods will continue to dominate the scene, accounting for more than two-thirds of the market over the next few years.

However, a new report from Yole’s analyst team sees a growing role for the photonic components in the automotive sector, with expectations of a sub-market worth nearly $60 million by 2026 as vehicle manufacturers incorporate new sensors.

The second-largest application area will continue to be communications. Currently worth $430 million, it is slated to grow to $566 million, at a modest annual growth rate of around 6 per cent.

Wavelength evolution
Yole analyst Pierrick Boulay said in a release from the Lyon firm: “VCSEL technology is continuously evolving. It has already occurred in the past with the transition from 850nm-based VCSELs for datacom applications to 940nm-based VCSEL arrays for 3D sensing.”

And that evolution could continue as a result of the design of new smart phones and increasing use of organic LED (OLED) displays.

“A few years ago, smart phones embedded a notch in the front display to implement the selfie camera and the face recognition module,” Boulay explained.

“These elements take up space and are unsightly. The goal is to hide these elements under the display. To enable this, a transition in the wavelength used for 3D sensing would be necessary for the light to penetrate the display.”

That is because OLEDs are transparent in the short-wave infrared (SWIR) spectrum, at 1300-1400 nm. “The shift from 940 nm to such SWIR wavelengths will deeply impact the components and the supply chain,” points out Yole.

“For 940nm, VCSELs are made from 6-inch gallium arsenide (GaAs) wafers. SWIR VCSELs should be based on indium phosphide (InP), which is much more difficult to process, and manufacturing is currently done on 2-inch and/or 3-inch [wafers].”

“Silicon can no longer be used in the SWIR region,” said the analyst. “SPADs [single-photon avalanche detectors] will have to be based on InGaAs material or use quantum dots.

“In both cases, the technology is still emerging, manufacturing yields are low, and availability of components is limited. This will lead to higher component costs for both the emitter and the receiver”

The Yole team concludes that, as a result, only Apple - whose phones now sell for more than $1000 - could afford such a profound technology shift. 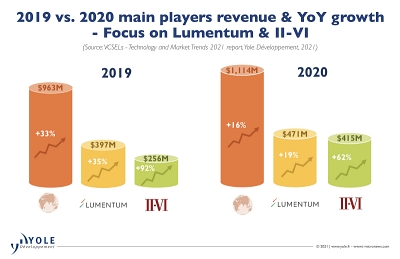 Multi-junction designs
Aside from phones, Yole sees an evolution in automotive lidar applications, where multi-junction VCSELs promise to offer the kind of power levels that would be needed for longer-range sensing than is necessary in consumer goods.

“Multi-junction technology represents the next leap forward for the VCSEL industry,” Yole stated, suggesting that there should be a number of user benefits.

For example a back-side emitting configuration would eliminate wire bonds and help to improve VCSEL performance, while allowing the use of micro lenses to enable more compact packages.

Of the major VCSEL producers, both Lumentum and II-VI have released multi-junction devices recently. At the virtual Photonics West event earlier this year, Lumentum unveiled 5- and 6-junction array designs aimed at automotive lidar and industrial deployments.

II-VI has since said that key customer Apple has committed to purchasing its multi-junction 940 nm emitters, which produce double the power of regular devices.

Yole characterizes the VCSEL market as being “led by two giants”. Although the likes of Philips Photonics (now owned by Trumpf) and ams-Osram are both important suppliers, the analyst team calculates that nearly 80 per cent of the market has been captured by Lumentum and II-VI.

II-VI has also been able to catch up Lumentum’s initial market dominance, thanks to a strong supply relationship between Apple and Finisar, which was acquired by II-VI in 2019.

Yole expects that a number of small acquisitions may continue to happen as larger providers look to penetrate new VCSEL applications.

One recent example of that saw Sandia National Laboratories spin-out Trilumina snapped up by Lumentum in its bid to target the emerging automotive market.