Photonic component maker says billion-dollar market could open up as Kinect-like technology gets into mobile devices. 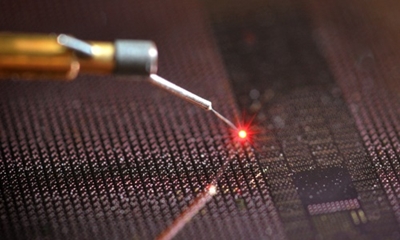 Lumentum, the photonics company best known for its optical communications products and high-power fiber lasers, could be set for a dramatic upturn in its business thanks to the emerging market for 3D sensing.

Exciting development
Describing the market opportunity as an “exciting development” in an investor conference call otherwise dedicated to the company’s current business, which is dominated by the communications sector, Lowe said:

“Leaders in next-generation consumer electronics, virtual and augmented reality, as well as the automobile industry, are looking to laser-based 3D sensing to enhance capabilities and enable new applications.”

But while Lumentum – in its previous guise as part of the more diversified JDSU – has enjoyed some success in the area before, shipping in volume to support the production of Microsoft’s gesture-enabled “Kinect” console, the emerging opportunity could dwarf that earlier business.

“Last month, we were at the Consumer Electronics Show in Las Vegas meeting with customers and the level of interest in 3D sensing was overwhelming,” added Lowe, while Lumentum’s CFO Aaron Tachibana quietly reported that spending on research and development was up slightly in the latest quarter because of investment in capacity for 3D sensing applications.

However, the scale of the opportunity only became apparent when Lowe and Tachibana were questioned by investment analysts. Initially, the CEO only hinted at the kind of scale he was anticipating, saying:

“The milestones that we achieved over the last six months increased my confidence in our ability to make 3D sensing a meaningful part of our business as we look forward.”

Billion-dollar business?
When then asked how the size of the newly emerging market for 3D sensors in mobile devices was likely to compare to the previous Kinect business, Lowe responded:

“I would say that the market is multiple times bigger than the Kinect business and could imagine quarters of $100 million-plus dollars, growing to over $1 billion as we get into multiple mobile devices and multiple customers with mobile devices. Every indication is that it’s a huge growth driver for us.”

While the precise timing of such a ramp remains uncertain, Lowe said that the company was already receiving revenue for its shipment of qualification devices, and “very comfortable with the progress we've made and the milestones we’ve achieved”.

Stressing the competitive advantage held by Lumentum thanks to the Kinect business with Microsoft, Lowe told investors:

“We've figured out how to make sure we design a product and test it accordingly to make sure we don't have any defective parts. So I would say that we're the only one in the world that has a track record of understanding 3D sensing and the reliability requirements associated with that.”

But on top of that, the CEO suggested that the scale of the potential market means that there will be enough demand for more than one supplier per application, and that Lumentum was partnering with foundries who were looking to build out their own supporting capacity for the application.

VCSELs or edge emitters?
Precisely what kind of photonic devices Lowe was referring to is not quite clear: the CEO noted that a similar opportunity would be likely to emerge in the automotive sector a couple of years down the line, and that although that would have different requirements the fundamental device technology on which the sensing application was based could be either VCSELs or edge-emitter lasers.

The Lumentum outlook on 3D sensing mirrors similarly optimistic commentary from II-VI in recent months. II-VI is also investing heavily in VCSEL production capacity at its US sites, and has cited emerging applications in sensing as one of the reasons for its acquisition of the compound semiconductor wafer fabrication facility in New Jersey that was previously owned by RF device maker Anadigics. It is also building out capacity at its Epiworks foundry business in Illinois.

Elsewhere, Lumentum posted a solid overall increase in sales for its latest quarter to $265 million, as it rides a wave of strong demand for components like pump lasers used in communications networks and devices for data centers – although that increase masked a sharp but temporary fall in sales of lasers as the company transitions to new product lines. Fiber laser sales in the latest quarter amounted to $11 million.

Wrapping up the investor call, Lowe again referenced the sensing opportunity, saying: “I believe we are in a worldwide bandwidth expansion, and photonics [is] increasingly becoming critical to manufacturing next-generation, high-volume 3D sensing applications, making the future bright at Lumentum.”

• Investors responded positively to the quarterly update, sending Lumentum’s stock up 10 per cent to trade at just under $45 on the Nasdaq exchange in early trading February 8 – close to a record high since the split from JDSU in August 2015.