Funds will accelerate development of headset-free display for enterprise and metaverse users. 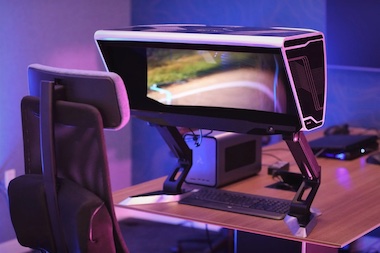 The funding round was led by Lockheed Martin Ventures, with other participants including Corning Incorporated and LG Technology Ventures. It follows the $1.6 million in seed funding secured by the company in July 2020.

Brelyon said that financing will be used to accelerate product development and hiring driven by rapidly growing enterprise and consumer demand for its Ultra Reality technology, a display monitor intended to replicate immersive and VR experiences without the need of a headset.

Brelyon launched Ultra Reality in January at CES 2022, where the company also announced its partnership with LG Display. The company won a Prism Award in the Displays category at SPIE Photonics West the same month.

"With Ultra Reality, Brelyon is introducing a new perspective on the future of work and play, while forging new inroads as an immersive portal to metaverse experiences," said Barmak Heshmat, CEO and founder of the company.

"The rise of GPUs and efficient graphic neural nets in computer graphics is enabling an array of computational optics in displays and making them more accessible to the mass market. This opens the possibility to provide immersive services far superior to 32-inch desktop monitors and headsets today."

Development of Ultra Reality is based on what Brelyon believes to be fundamental limitations enforced by laws of optics for any augmented reality display that uses passive optical elements, such as visors, waveguides, and meta-surfaces, to deliver the image to the eye.

The alternative is to use the principles of monitor displays, but employ a monitor delivering levels of visual data that can saturate human depth perception. A 2021 Optics Express paper co-authored by Heshmat indicated that the "fundamental guidelines for designing optimal near eye displays, light-field monitors, and 3D screens" had now been defined.

A new take on the metaverse and virtual worlds

Built upon MIT research, Brelyon is pioneering a set of technologies meeting these guidelines and providing an immersive exerpience. One of the first results is the creation of virtual displays which manipulate the light to allow the viewer a window-like experience with extended meters of depth.

According to Brelyon technical data, Ultra Reality "uses precise wavefront engineering to create a massive field of view with true optical depth layers, generating an immersive panoramic virtual screen that engulfs the viewer without the need for a headset, and all in a small desktop footprint."

At CES the company indicated that its product employed a LG LCD screen, with the intention of bringing OLED technology to the platform via the partnership with LG. Higher refresh rates than the demo model's 60 Hz are also planned, increasing the platform's attractiveness for high-end applications as well as to gamers.

"Brelyon has a completely new take on metaverse and virtual worlds," said Anshul Agarwal from LG Technology Ventures. "Unlike conventional wisdom that is focused on binocular 3D and holograms, Brelyon's approach is to leverage depth to push on visual and functional performance in the virtual domain. This opens the door to visual experiences that have orders of magnitude better fidelity at significantly lower computational cost."