Ribbon-cutting ceremony takes place next week; re-fitted Texas facility expected to be up and running by the end of the year. 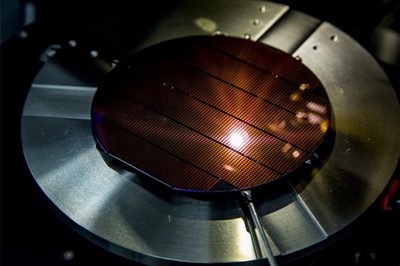 Optoelectronic component maker Finisar says that it is on target to begin production of vertical cavity surface-emitting lasers (VCSELs) at its giant new facility in Sherman, Texas, by the end of 2018.

The site, previously owned by silicon semiconductor firm MEMC and solar panel maker SunEdison, was acquired by Finisar late last year and has been undergoing a major re-fit since December 2017.

California-headquartered Finisar says that it intends to make Sherman the “VCSEL capital of the world” once production does start in earnest. It is targeting applications in 3D facial recognition, augmented reality (AR), automotive in-cabin sensing, and even automotive lidar with the tiny devices.

While Finisar has long-standing expertise in VCSEL production at its Allen facility, also in Texas, the new site - supported to a large extent with what amounts to an early purchase order placed by Apple - will enable a massive increase in capacity, and the production of devices on larger (6-inch diameter) wafers that should enhance yields and help to push down the price point of VCSEL technology.

Finisar is one of a handful of competitors developing state-of-the-art processes to improve the performance and increase the availability of VCSELs for anticipated new high-volume applications in consumer electronics and the automotive sector.

Others to have made hefty recent investments include US-based II-VI and Lumentum, as well as Philips Photonics in Europe. Austria-headquartered AMS is working on a major expansion in Singapore, while Osram recently acquired VCSEL specialist Vixar.

According to Finisar, the updated Sherman facility is currently certified as “clean room operational”, with the first production tooling already installed and qualified. The company has also hired nearly 200 employees, including the operations and support staff necessary to begin production.

That recruitment activity will be further stepped up later this year to support the anticipated ramp to high-volume production.

“Finisar is excited to unveil this new state-of-the-art facility which will expand critical production capacity of our VCSEL products needed to support customer requirements,” said Hurlston in a release announcing the July 9 ceremony. “We are also pleased to create hundreds of manufacturing jobs in the US and to hire talent from the local area as we work together to make Sherman the VCSEL Capital of the World.”

In the three months that ended April 29, the company delivered a $26.7 million loss as sales slipped nearly 7 per cent year-on-year to $310 million.

Hurlston partly blamed the fixed costs of the firm’s Allen, Texas, VCSEL facility for that loss – with the slack demand weighing on Finisar’s margins - but during a conference call with investors the CEO added:

“We expect to see an increase in demand for our VCSEL laser [arrays] for 3D sensing applications in the second fiscal quarter [which runs August-October], in connection with the expected timing of new product introductions by our customers. In addition, we have closed a number of design win for our VCSELs in consumer and automotive applications.”

Of the Sherman site, he added: “[We] still expect to be qualified and in production using 6-inch wafers by the end of the calendar year, which we expect to significantly increase our production capacity.”

While the vast majority of that forthcoming VCSEL demand is related to smart phone handset deployments, Hurlston said that device production for automotive applications would likely take place in 2019 and 2020.

“We're definitely starting to see additional traction in the handset space, which is the highest volume opportunity,” the CEO added.