Photonics and materials giant to re-brand under the ‘Coherent’ name in early September. 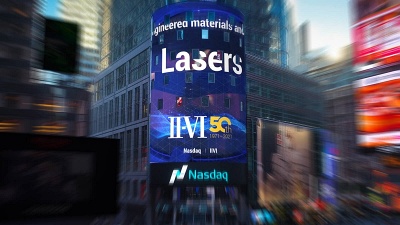 Diversified photonics and materials company II-VI has filed a record-breaking sales figure for the quarter ending June 30 - the day before it completed its acquisition of laser firm Coherent.

At $887 million, the latest revenue total represented an increase of nearly 10 per cent on the same period last year, and was above the range predicted by the company’s management team in May.

Revenues attributed to the firm’s “photonic solutions” division grew to $597 million in the June quarter, up 9 per cent year-on-year. Sales of silicon carbide wafers, which are finding increasing use in power electronics, make up the remainder of II-VI's revenues.

The strong finish to the Pittsburgh firm’s 2022 fiscal year pushed its annual revenues to $3.32 billion, up 7 per cent on the prior year. The addition of the Coherent business will lift that annual total beyond $5 billion, with II-VI CEO Chuck Mattera describing “sparks of excitement” among customers following the deal’s completion.

On the bottom line, II-VI’s full-year pre-tax earnings of $282 million were down on last year’s total of $353 million.

Divisional shake-up
Discussing the latest results with investors, Mattera hailed the performance as the result of “deep customer relationships, decades of investments in technology and sophisticated manufacturing platforms, and leading-edge products”.

And he confirmed that the joint II-VI-Coherent enterprise would officially become known as “Coherent Corp” from September 8, with the merged company set to trade on the Nasdaq under the ticker symbol “COHR”.

Describing Coherent as a long-standing innovator offering the “gold standard” in laser systems, Mattera said that the addition of the Californian laser company and the adoption of its name would expand the wider firm’s brand recognition across numerous market sectors.

The II-VI name refers to the chemical elements in the Periodic Table that feature in optical components made by the company for industrial laser applications, most obviously zinc selenide optics in carbon dioxide lasers.

However, starting with its 2013 acquisition of Oclaro's laser diodes business the II-VI operation has become increasingly skewed towards photonic components, modules, and subsystems, a trend accelerated by the 2019 deal to buy Finisar and now the Coherent merger.

The combined company’s business divisions are also in line for a shake-up. The new structure will focus on three reporting segments - materials, networking, and lasers - and four end markets: industrial, communications, electronics, and instrumentation, with a total addressable market standing at $65 billion and expected to grow quickly.

Mattera said that the current business environment remained a challenge, in particular the ongoing supply chain constraints that have impacted virtually every industrial sector with shortages of semiconductor components.

Although some in the photonics sector have hinted that those supply-chain issues are finally starting to recede, the II-VI CEO told investors that the apparently improving situation was more the result of prior efforts to second- and third-source supplies of certain parts.

CEO signs long-term deal
Shortly before the latest earnings release, II-VI announced that Mattera - who has served as company CEO since 2016 and overseen the major acquisitions of Finisar and Coherent - had extended his contract with the firm until 2030.

The long-term deal should see the 66-year-old executive complete a 30-year association with the company, having initially been appointed to the II-VI board of directors in 2000.

Prior to that, Mattera had spent 20 years working in the Optoelectronic Device Division of AT&T Bell Laboratories, Lucent Technologies, and Agere Systems, leading the development and production of semiconductor laser-based materials and devices for high-speed communications.

“I look forward with a great sense of mission to continuing to build on a strong record of excellence, to grow the company at a significant pace during this decade, and to set the stage for what may come next and beyond,” Mattera said, also paying tribute to predecessors Carl Johnson - who co-founded the firm in 1971 - and Fran Kramer.

• With broad-based growth across the business and particular strength in sales of components and modules for data communications and 3D sensing applications - where II-VI has gained share from Lumentum thanks to key customer Apple diversifying its supply lines - Mattera and his team are now expecting to post revenues of between $1.3 billion and $1.4 billion for the September quarter.

That outlook appeared to be in line with market expectations, with II-VI’s stock price holding steady following the firm’s latest update.

With its stock trading at just over $56 on August 24, the Nasdaq-listed company now has a market capitalization of around $7.3 billion.