Lumentum looks to innovate as supply constraints start to ease 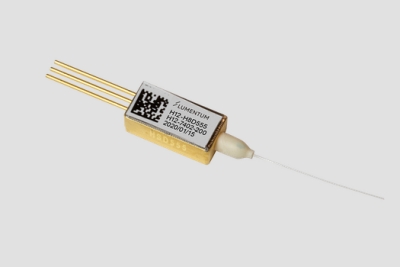 Lumentum says that it is making “meaningful progress” in alleviating shortages of key components in the supply chain, and that it will boost research and development spending as it positions the business for future growth.

The California-based photonics company, which has recently expanded with the acquisitions of both NeoPhotonics and IPG Photonics’ telecoms transmission unit, has just announced full-year sales of $1.7 billion - down slightly on the prior year.

Sales of $422 milion in the quarter ending July 2 were up from $392 million a year ago, with net income also rising, to just under $35 million.

Supply crunch starts to ease
Thanks in part to the recent additions of NeoPhotonics and the IPG unit, as well as fast-growing demand for Lumentum’s communications components and industrial lasers, the annual sales total is expected to rise by more than 25 per cent in the current fiscal year.

However, there will also be a significant reset in the 3D sensing business, where key customer Apple is diversifying its supply of vertical cavity surface-emitting lasers (VCSELs) - something that has previously been dominated by Lumentum.

Discussing the complex combination of business trends with investors, Lumentum’s CEO Alan Lowe said that the company had set new annual sales records for terrestrial pump lasers and submarine components for optical networks - while the firm’s commercial lasers business posted a 59 per cent rise in revenues to $194 million.

The trend in pump lasers and submarine components is particularly encouraging, as these are typically a leading indicator of future demand for other parts of the optical communications business.

And although shortages of semiconductor components is still hampering business to the tune of $100 million per quarter, Lowe indicated that the supply crunch was now starting to ease.

“Our supply chain team has done a great job and has been relentless with our suppliers,” said the CEO, also noting progress with third-party providers of materials and integrated circuits. Despite the easing situation, shortages are still expected into the first half of 2023.

3D sensing supply shift
The other drag on Lumentum’s business currently is its declining share of the 3D sensing sector, which remains dominated by smart phone applications and relationships with Apple for now.

With Apple diversifying its supplier base towards II-IV and others, Lumentum expects its own smart phone 3D sensing product sales to decline by as much as 50 per cent in the current fiscal year - although Apple will still end up accounting for 10-15 per cent of annual revenues.

“We are executing on our strategy to expand our 3D sensing and lidar platforms into applications beyond smart phones,” Lowe told an investor conference call, adding that in the latest quarter Lumentum posted $2 million in sales for automotive applications - with further growth expected in the current quarter.

“Our product pipeline for automotive, industrial and consumer use cases is growing,” added the CEO. “In automotive, we are ramping production of multi-junction VCSEL arrays, long-range lidar products, and products for in-cabin driver monitoring systems.”

He believes that the company should be able to capture tens of dollars of revenue per automobile from laser sales alone, and that this figure would be even higher for all solid-state lidar approaches.

“These solid results reflect a growing set of applications, introduction of new products and growth into new markets and with new customers, such as in solar cell and electric vehicle battery processing,” said the CEO, adding that he was expecting record sales from the laser division for the September quarter.

Lowe also told investors that the company would increase spending on research and development across all of its divisions in the coming year - partly as a result of its recent acquisition of IPG’s telecoms business.

While the division’s revenue will not add significant sums to Lumentum’s communications business, Lowe sees strong potential in the technologies under development there.

“The real gem is the team and the progress that they've made on DSP [digital signal processor] technology,” he said, indicating that Lumentum would be making a substantial investment towards the development and production of leading-edge DSPs.

“We're making this investment in acquisitions for the long term,” added Lowe. “And I think it will position us quite well, especially as you put together the NeoPhotonics and IPG products and technology [with] what Lumentum has. Together, it really puts us in a solid position [for] vertical integration in coherent components and modules.”

• Despite the positive messaging, Lumentum’s stock price dropped in value by around 8 per cent following the latest update, with investors apparently surprised by the impact of the 3D sensing market share loss and increased R&D spending on profit margins.

After closing at just over $89 on the Nasdaq on August 17, Lumentum’s market capitalization stood at $6.1 billion.