Glass and fiber-optics giant expects to create 250 jobs at site in Phoenix area. 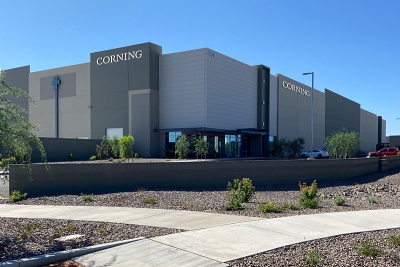 Responding to strong demand for the build-out of fiber-optic networks in the US, Corning has revealed plans to construct a new optical cable manufacturing facility in Arizona.

The site in Gilbert, Arizona, which is expected to employ 250 people following completion in 2024, relates specifically to moves made by key customer AT&T to expand its fiber-optic network service.

“The new facility is Corning’s latest in a series of investments in fiber and cable manufacturing totaling more than $500 million since 2020,” said Corning, noting that the additional capacity would nearly double the firm’s ability to serve the US cable market.

“Public and private investments in broadband, 5G, and the cloud are accelerating a large, multi-year wave of growth for fiber-based networks - and Corning, as the world leader in passive optical communications, is uniquely positioned to support these network builds.”

AT&T’s CEO John Stankey commented: “This investment is a significant step forward for our country and building world-class broadband networks that will help narrow the nation’s digital divide.

“This new facility will provide additional optical cable capacity to meet the record demand the industry is seeing for fast, reliable connectivity.”

“We believe the industry is at the beginning of a large multi-year wave of growth for passive optical networks, and we're well-positioned to capture that growth,” said Weeks as the division recorded sales of $1.3 billion in the three months ending June 30 - up 22 per cent on the same period last year.

“What we're hearing from [customers] is that their investment in fiber-optics is their top strategic priority,” he added. “They're actually asking us to commit to supply more into next year and beyond. If we could make more fiber and cable, we could sell more fiber and cable.”

Looking further ahead, Corning and AT&T are also partnering to create training programs enabling the next generation of technicians to build new optical networks.

Those efforts are in support of the White House’s “Talent Pipeline Challenge”, a program intended to help employers build training partnerships connecting US workers with infrastructure and manufacturing jobs.

Build-out of the new optical networks envisioned is expected to require an additional 850,000 workers through 2025, said the firms, whose Fiber Optic Training Program has already kicked off, with an initial class currently underway in North Carolina.

Corning CEO Weeks added: “Corning is doing our part to make sure everyone - regardless of where they live - has access to reliable, high-speed connections enabled by optical fiber.”