Sprawling photonics business will be named Coherent and trade on the Nasdaq under ‘COHR’ ticker symbol. 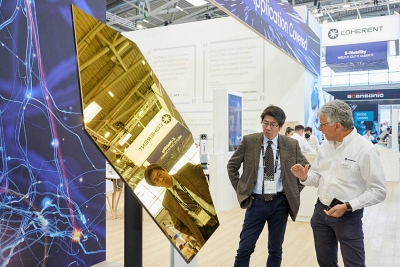 Having just completed its acquisition of Coherent, II-VI is set to drop its own name and instead adopt the branding of the historic laser manufacturer.

The near-$7 billion deal was consummated on July 1 and saw two of the photonics industry’s biggest players merge into a single corporate entity, after a protracted takeover that was first agreed in March 2021.

Completion of the merger had been held up for months by China’s anti-trust regulators, but the State Administration for Market Regulation (SAMR) finally cleared the deal last week.

Shortly after completion, II-VI’s CEO Chuck Mattera revealed that the combined company would be called Coherent.

“We will soon announce the date of the launch of our new brand identity,” he added. “While the name Coherent has a strong association with lasers, the broader meaning of the word is ‘bringing things together’.”

Also thanking Coherent CEO Andy Mattes for enabling a successful integration process, Mattera said of the laser firm: “Coherent is an innovator with a rich portfolio of some of the most advanced technologies in the world, which have been transformative in a broad range of markets.”

Mattera explained that the firm would now be arranged into three distinct business segments - lasers, materials, and networking - to serve the four key application markets of industrial, communications, electronics, and instrumentation.

II-VI’s Sunny Sun will take charge of the networking segment, which was previously known as “photonic solutions”.

“Together, these three powerful segments will be the vanguard of our new brand promise,” II-VI announced. “We will empower our customers to define the future through our breakthrough technologies.”

Mattera continued: “With our foundation in materials and our unstoppable imagination, we will enable the next evolution of the cloud, 3D sensing, electric vehicles, additive manufacturing, the commercialization of space, and the personalization of healthcare, just to name a few.

“We are together on a journey towards a future that will be increasingly mobile, intelligent, and electric, accelerating the pace of innovation and enabling a stream of spectacular successes that will sustainably change the world around us.”