II-VI also has 30-day option to buy Oclaro’s amplifier and micro-optics business for another $88m. 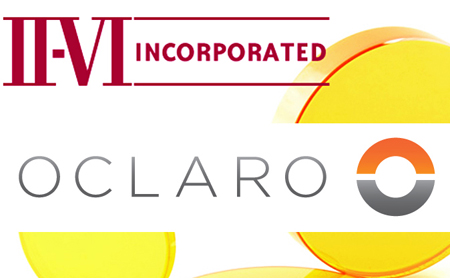 Oclaro, a developer of optical communications solutions, has sold its Oclaro Switzerland GmbH subsidiary and associated laser diodes business to II-VI Inc. in a transaction valued at $115 million. In addition, II-VI has acquired an exclusive option to purchase Oclaro's optical amplifier and micro-optics business for$88 million in cash.

Only four months ago, Oclaro's stock lost a quarter of its value as the company agreed to sell off assets ‘expeditiously’ following a $25 million one-year bridging loan from Providence Equity Capital Markets. Shortly afterwards, Alain Couder, then Oclaro CEO who oversaw two major acquisitions and the company’s re-branding from its previous guise of Bookham, promptly stepped down.

Greg Dougherty, Couder's replacement, commented, "The sale of our gallium arsenide laser diode business is an important first step in our plan to restructure the company. The Zurich-based business, including the team, is a valuable asset and we wish II-VI and the team much future success.

"We will use the proceeds from the sale to fully repay our bridge financing and to begin restructuring the company for the future. We intend to further simplify our operating footprint, reduce our cost structure and focus our R&D investment in the optical communications market where we can leverage our core competencies."

Of the total transaction value of $115 million, Oclaro received $92 million in cash today. Oclaro will retain the existing accounts receivable of the business, estimated at approximately $15 million. The remaining $8 million is being held by II-VI subject to traditional post-closing conditions.

As part of the agreement, II-VI has purchased the Oclaro Zurich, Switzerland company, which includes its GaAs fabrication facility, and also the corresponding high power laser diodes, VCSEL and 980nm pump laser product lines, including intellectual property, inventory, equipment and a related R&D facility in Tucson all of which are associated with these businesses ("the Zurich business"). Revenues for the Zurich business were approximately $87 million for the fiscal year ended June 29, 2013.

The option to purchase Oclaro's optical amplifier and micro-optics business, for which II-VI separately paid $5 million in cash, will expire if not exercised within 30 days. If this option is exercised and II-VI purchases the amplifier and micro-optics business, the option price will be applied to the purchase price. If II-VI does not exercise this option, the $5 million payment will be retained by Oclaro.

Oclaro also announced that that on Monday, September 16, 2013 at 5:00 p.m. Eastern Time the company will host a conference call to discuss this sale to II-VI as well as its latest financial results for the fourth quarter and fiscal year 2013, which ended June 29, 2013.