Lumentum to acquire NeoPhotonics for $900M

The proposed all-cash deal values NeoPhotonics at $918 million, and would boost Lumentum’s offering across the optical communications sector.

While it has already been approved by both companies’ boards of directors, the acquisition remains subject to shareholder and regulatory clearance. Completion is anticipated in the second half of 2022, assuming all goes according to plan.

Both companies have significant operations in China, meaning that the deal would need to be signed off by the relevant authorities in the country.

Merger rationale
Commenting on the rationale behind the proposal, Lumentum’s CEO Alan Lowe said customer feedback on the proposed merger had been positive, adding:

“With NeoPhotonics, we're making another important investment in better serving our customers and expanding our photonics capabilities at a time when photonics are at the forefront of favorable long-term market trends."

Tim Jenks, Lowe’s counterpart at NeoPhotonics, commented: “Today's announcement is an exciting milestone for NeoPhotonics. The increasing global demand for our ultra-pure light tunable lasers and photonics technologies for speed over distance applications is more apparent than ever, and Lumentum is the ideal partner to serve our customers on a larger scale.”

Jenks said that the two firms offered a complementary product portfolio, and that the combined entity would benefit from increased scale, breadth of customer application knowledge, and research and development capabilities.

News of the proposed merger comes a few months after Lumentum’s $7 billion bid to acquire fellow laser company Coherent was eventually usurped by II-VI, with that deal expected to complete by the end of this year.

With its latest move, Lumentum appears to be doubling down on the opportunity in optical communications, rather than pursuing the broader diversification strategy implied by the Coherent acquisition bid. 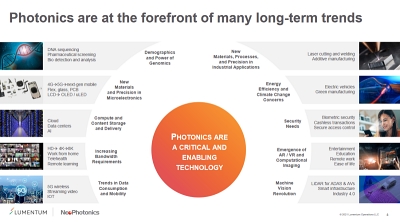 Lumentum is more diversified, with cloud and networking applications accounting for around 60 per cent of its sales. Among its key product lines are reconfigurable optical add-drop multiplexers (ROADMs) and components and modules based on indium phosphide (InP) integrated circuits.

Most of the remaining 40 per cent of Lumentum’s sales come from 3D sensing and lidar applications, alongside fiber lasers used in materials processing.

Lowe and Jenks believe that the total addressable market for those combined product lines amounts to some $20 billion, with the market for components and modules operating at 400 Gb/s and faster expected to ramp quickly as demand for bandwidth continues its inexorable rise.

NeoPhotonics also revealed recently that it had developed a new 1550 nm InP laser aimed at the emerging opportunity in frequency-modulated continuous wave (FMCW) lidar, something that could complement Lumentum’s expertise in VCSELs and other edge-emitting laser diodes for 3D sensing and more conventional lidar technologies.

Lumentum fiber laser sales bounce
Alongside details of the merger plan, Lumentum and NeoPhotonics both reported results for their most recent financial quarters.

Lumentum’s sales figure of $448 million for the three months ending October 2 beat the firm’s earlier forecast range - despite ongoing issues with chip shortages - and was attributable partly to a sharp rise in sales of commercial lasers for non-communication applications.

At $42.4 million, revenues for the commercial lasers division were up nearly 80 per cent year-on-year. Attributed largely to demand for high-power fiber lasers, that rise neatly offset a 5 per cent year-on-year drop at Lumentum’s much larger optical communications division, which posted sales of $406 million.

But sales into 3D sensing applications also proved higher than expected, and with improved margins the overall impact on the bottom line was a pre-tax income of $100 million for the quarter, up from $84 million a year ago.

Meanwhile NeoPhotonics, which is also battling supply chain shortages, posted quarterly sales of $84 million. That represented a sharp rise on the June quarter, but was down 18 per cent on the same period last year.

However things look better on the bottom line, with NeoPhotonics shrinking its pre-tax loss to just $1.4 million, compared with $6 million a year ago.