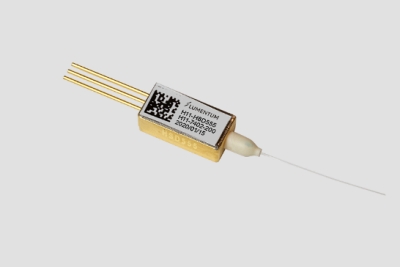 Executives at Lumentum have hailed the firm’s latest fiscal year as the best in the company’s history, but warned that global shortages of electronic components are now starting to hit sales.

For the 12 months ending July 3, the San Jose photonics company delivered a net income of just under $400 million on record-breaking annual revenues of $1.74 billion.

Both of those numbers represent record highs, although the income figure was boosted by a $207 million-plus penalty fee paid to the firm when Coherent terminated the pair's previously agreed merger deal following a rival bid from II-VI.

For the most recent quarter, sales of $392 million were up around 7 per cent on the same period in 2020, while pre-tax earnings doubled to $29 million.

CEO Alan Lowe indicated that the positive momentum looks set to continue, highlighting a strong order flow in the latest quarter, but also quantified the likely impact of electronic component shortages within the supply chain.

He said: “While demand continues to grow into the first quarter [of Lumentum’s new fiscal year], shortages of critical semiconductor components are negatively impacting our first quarter revenue outlook by more than $30 million.”

3D sensing for automotive
Describing the just-completed fiscal year as Lumentum’s best “by any measure” - despite the backdrop of a tough macroeconomic environment and the ongoing Covid-19 pandemic - Lowe pointed to strong demand for several of the firm’s key product lines.

That included a 50 per cent year-on-year rise in sales of externally modulated laser (EML) chips in the latest quarter, thanks to upgrades in data centers.

“During [fiscal] Q4, we had record datacom chip backlog, as cloud data centers are transitioning to higher speeds, where we have market-leading, differentiated products,” the CEO added.

In the market for 3D sensing, where Lumentum is a leading supplier of vertical-cavity surface-emitting laser (VCSEL) arrays, revenue in the latest quarter was up nearly 40 per cent on the same period in 2020, and at a record high for the time of year.

That sales figure is expected to rise again in the current quarter, with Lowe pointing to a growing number of applications in the automotive industry - notably for in-cabin sensors - as part of the reason.

However, a transition to smaller die sizes and correspondingly lower average selling prices of the VCSEL products in smart phone applications is still likely to see revenues from 3D sensing applications decline in the near term.

On the telecom side, the CEO noted that a rise in demand for pump lasers - to the second-highest level seen in the past decade - may herald a wider boom in the sector, as the pump sources are usually something of a lead indicator.

That part of the Lumentum business is where the supply chain constraints are having the most impact, Lowe told an investor conference call discussing the latest results.

Looking to the September quarter, which marks the start of the company’s new fiscal year, Lumentum’s management team has pencilled in sales of somewhere between $430 million and $445 million.

• The latest results and outlook from Lumentum appeared to be in line with market expectations, with the company’s stock price virtually unmoved in response to the update.

Valued at just over $82 in early trading on the Nasdaq on August 18, Lumentum’s stock has recovered from the sharp dip seen after the firm’s May update, and equates to a market capitalization of around $6.2 billion.