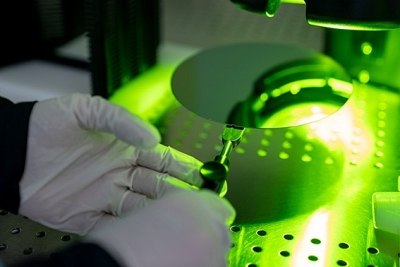 The two firms, who are long-term partners in key areas such as vertical-cavity surface-emitting laser (VCSEL) production, say that the multi-year agreement is focused on high-volume production of epiwafers to be used across Lumentum’s portfolio - and in particular to enable lidar for autonomous vehicles.

IQE is described as “the epitaxy partner of choice” for this technology, with a wider range of cutting-edge technologies including biometric security, data communications, and extended reality (AR/VR/MR) applications also targeted.

VCSEL ramp
Lumentum and IQE add that there is further provision to work together on longer-term research and development initiatives, with the wafer foundry’s CEO Americo Lemos saying:

“Our partnership with Lumentum is in alignment with our strategy to strengthen our customer relationships and to enter into long-term agreements securing wafer supply.

“Lumentum and IQE are industry leaders in the 3D sensing space, and this partnership is underpinned by IQE’s unrivalled technology portfolio. We look forward to our continued collaboration and expansion of our business relationship into new market segments.”

Lumentum CEO Alan Lowe added: “I am pleased to extend our fruitful partnership with IQE into the future. They supported our ramp to high volumes in the consumer space, where we have shipped more than 1 billion large-scale VCSEL arrays.

“As we start to ramp high volumes of differentiated solutions into even more demanding applications in the coming years in the automotive, extended reality, and industrial spaces, I’m sure our partnership will continue to flourish.”

200 mm wafers
IQE said recently that it had now developed 200 mm-diameter epiwafers for VCSEL production, an advance that should generate a step-change in terms of both production volumes and the cost of making the devices.

The current state of the art in VCSEL production uses 150 mm-diameter wafers, with the move from 100 mm-diameter sizes viewed as critical to the successful deployment of VCSEL arrays in smart phones for 3D sensing applications like facial security scanning.

Last month Lumentum’s Lowe said during an investor conference call that Lumentum had expanded its development activities in automotive lidar, with production of multi-junction VCSELs for China’s Hesai now ramping up.

“New automotive customers are turning to our lasers for lidar, and we are engaged with more customers on extended reality applications,“ said the CEO at the time.