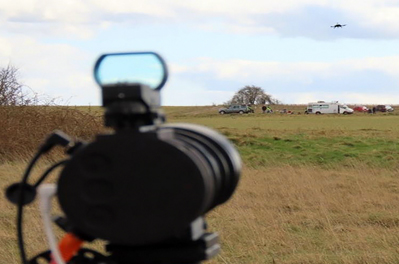 QinetiQ, a British multinational defense technology company, has presented what it calls “the world’s first successful demonstration of an airborne un-crewed platform being controlled via a laser communication system.” The Farnborough-headquartered firm added that it is “strengthening military capability for covert, low detection probability operations”.

FSOC provides high bandwidth communications with a very low probability of detection, low logistical footprint, and the potential to negate the considerable investment that adversaries may have made in denying the RF spectrum.

The control of an airborne un-crewed platform has previously been enabled via the use of radio frequency technologies, which are prone to detection and interference. This was a successful demonstration of an integrated FSOC system as a means of operation in a contested RF environment where there is a need for secure, covert operations.

The demonstration formed part of the DSTL Air Command and Control (C2), Intelligence Surveillance & Reconnaissance (ISR) and Interoperability project. The project objectives include improving both the digital interoperability and resilience of the communication systems that connect air platforms and associated capabilities (both current and potential). The outputs of the project are supporting exploitation activities within the UK Minstry of Defence (MoD) Front Line Commands, including Air, Land, Maritime and Joint forces.

Dave Dixon, QinetiQ Technical Lead for the project, commented, “This innovative use of FSOC builds on the earlier Crewed-Uncrewed Teaming demonstrations that provided UK and European firsts in the live airborne control of UAS. It also provides further evidence that teams comprising both people and machines are an essential part of how militaries will operate in the future.”

Rob Scott, QinetiQ Program Manager, added, “To make it possible, we had to take a mission-led innovation approach and work very closely with Dstl and partners. We’d also like to thank AVoptics for their support and rapid integration of their WOLF FSOC system into the demonstration.”

The demonstration was a live-virtual event, using interoperable message standards to task a number of virtual platforms and the live UAS, using QinetiQ ACCSIOM swarm technology. The extensive ground and air space was provided by the British Army within Salisbury Plain Training Area (SPTA), in the west of England.