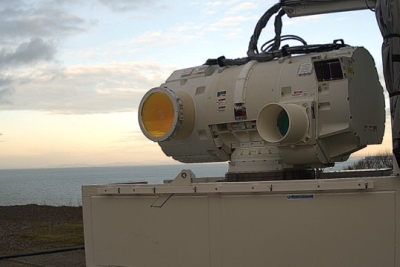 Dragonfire, the UK’s effort to develop an independent laser weapon, is said to be ready for static high-power trials, having recently shown good tracking performance at low power output.

MBDA Systems, the missile systems company that is leading the consortium, says that the recent trials demonstrated the ability to track air and sea targets with “exceptionally high accuracy”.

Originally funded in 2017, the consortium is a joint effort between industry and the UK’s Ministry of Defence (MOD), with defense firm Leonardo, QinetiQ, and the UK’s Defence Science and Technology Laboratory (DSTL) also involved.

The next stage of the project will seek to combine the aiming accuracy and power of the novel laser weapon, before subsequent efforts engage targets in operationally representative scenarios.

“The success of these trials is a key step in the development of sovereign laser directed energy weapons. It is the culmination of a lot of hard work from both the industry and DSTL teams, overcoming disruption due to Covid and technical challenges from the use of unique innovations in Dragonfire that are testing the very limits of what is physically possible in the laser weapons domain.”

MBDA says that the key challenge is safely controlling and focusing high-laser power onto an extremely precise point, at long range.

“The tracking trial was an excellent test of the component parts of the Dragonfire tracking system working together to do this,” added the firm.

”This trial used a low-power QinetiQ laser, Leonardo’s beam director and MBDA’s image processing and control technology to facilitate the ultra-precise “fine” pointing and tracking accuracy, which will be required to generate the damage effect when a high-powered laser will be used.”

Coherent beam combining
Other important subsystems, including the effector management system (EMS), and “coarse” tracking capability - which turns the laser towards its target - are also said to have proved themselves in the low-power trial.

While the Dragonfire consortium has not revealed much detail about the system, it is believed to rely on coherent combination of multiple fiber lasers to generate tens of kilowatts of output, using a local phase locking technique.

QinetiQ says that this approach was first demonstrated at low power around a decade ago, before outdoor trials at a laser test facility at the MOD’s Shoeburyness site in 2015 proved that it was possible to propagate a phase-locked beam over 2 km, in challenging atmospheric conditions.

“Phase-locked beams create a brighter central spot which is important for effectiveness,” explains the defense technology company on its web site.

“The key effector subsystem that manages this phase-locking or coherent combination is the beam combiner. How QinetiQ implements the mechanism inside the beam combiner is the interesting part.”

Towards megawatt scale
Meanwhile in the US, major defense contractor Northrop Grumman says it has completed a preliminary design review for a prototype laser weapon capable of being scaled to more than a megawatt of power.

HELSI aims to demonstrate a very-high-energy laser prototype - also relying on coherent beam combining technology that has been developed by Northrop Grumman.

The firm says it will test the prototype at progressively higher powers later this year, to “prove” the coherent beam combining design.

Robert Fleming, Northrop Grumman’s VP and general manager of strategic space systems, added: “This is an important step in the ability to combine high-power laser beams into a single beam that can be scaled for maximum power.

“We’re on track to demonstrate the technology, leveraging our decades of experience in the field.”

In 2020, the US Army said that work under the HELSI project would be instrumental for its plans to adopt laser weapons in the near future.

Developments were expected to result in initial demonstration of a 300 kW-class, high-energy laser prototype by September this year, and four operational prototypes of the same power integrated on a platoon’s tactical vehicles by September 2024 - although that timeline has very likely been delayed by the Covid pandemic.