Raytheon UK to set up site for high-energy laser weapons 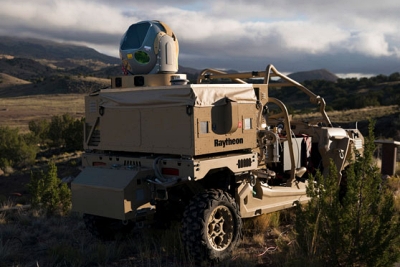 Raytheon’s UK subsidiary is planning to open an advanced laser integration center next year that will focus on testing, fielding, and maintenance of high-energy laser weapons.

The facility, at the firm’s existing site in Livingston, Scotland, is a response to growing demand from customers, and will be capable of scaling up as the number of laser systems in the field expands.

“This new regional hub will also help to meet the accelerated delivery schedules customers are requesting and ensure that fielded systems can be quickly maintained and repaired,” stated the giant defense contractor.

Michael Hofle, senior director of Raytheon UK's high-energy lasers (HEL) division, said: “We’ve all seen that asymmetric threats like drones, rockets, artillery and mortars are a serious problem, and demand is spiking for cost-effective lasers to defeat them.

“Standing up an advanced integration facility in the UK reflects the maturity of our technology and our commitment to deliver the HEL systems our customers need to defend the skies.”

Aiming for the front line
The announcement comes in the same week that missile manufacturer MBDA Systems, which is leading the UK’s “Dragonfire” project to develop a "sovereign" high-power laser weapon independently, said that its system had successfully completed low-power tracking tests, and was now ready for high-power trials.

Last year, Raytheon UK was itself awarded a demonstrator contract to provide a HEL weapon system to the UK’s Ministry of Defence (MOD), to be installed on “Wolfhound” land patrol vehicles.

The firm says that both the demonstrator and the advanced laser integration center reflect a continued commitment to working with the MOD on directed energy to help fulfill a key strategic objective of the UK’s “Integrated Review”.

Published last year, that review document indicated that new directed energy weapons for land and sea applications will be trialled next year, and were expected to reach the front line within a decade.

At the same time, US-based Northrop Grumman has just completed a preliminary design review establishing the company’s technical approach to laser weapons - using coherent combining - and is looking at ways to increase power to beyond a megawatt.

Meanwhile the US Navy continues to trial the technology, and the US Army is aiming to deploy several operational laser weapons with a platoon within the next couple of years.

Raytheon says that it has licenses to export various configurations of its HEL technology in the UK, Europe and around the world. John Gallagher, managing director of weapons and sensors at Raytheon UK, added:

“With experts projecting that high-energy lasers could make up as much as 30 per cent of an air defense’s infrastructure in the future, establishing a regional laser integration center in the UK is an important step to deliver advanced defensive technology where it’s needed, while reducing overall costs of these systems.

“This center will help position the UK as a leading nation in directed energy and ensure that the technology continues to be brought out of the lab and into the operational field.”