Dignitaries welcome the ‘first and only’ facility for evaluating directed energy systems in a maritime environment. 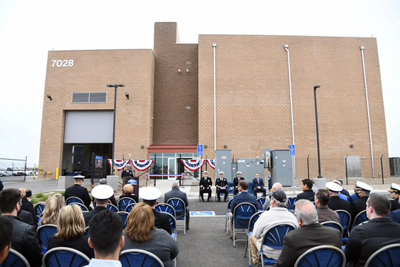 The US Navy’s Directed Energy Systems Integration Laboratory (DESIL) has this month been officially opened at Naval Base Ventura County, Point Mugu, in Hueneme, California. At the opening ceremony, Navy senior leaders were joined by local officials, including Camarillo Mayor Charlotte Craven and representatives from the builder Harper Construction at a ribbon-cutting ceremony at the new facility.

DESIL is an 18,500-square-foot, three-story facility that will allow the Navy to test and evaluate laser weapons systems in a maritime environment while taking advantage of the Point Mugu Sea Range, including 36,000 miles of controlled air and sea space that can stretch to more than 220,000 miles. The lab will also permit the installation of directed energy systems on its roof and inside the building for evaluation.

Captain Robert “Barr” Kimnach, III, commanding officer of Naval Base Ventura County, commented, “We have an amazing relationship with Naval Sea Systems Command, our tenants and Naval Facilities Engineering Systems Command, and that relationship that we have with the other commands and tenants is really what makes this happen and I'm excited to see it go into the future.”

Thomas Dowd, director, Ranges/Targets Operations, Instrumentation and Labs for Naval Air Warfare Center Weapons Division, said, “What we’re talking about here is lasers and that sense of wonderment that I have, being born into a world where lasers were purely science fiction. Now we’re talking about integrating laser systems as a deployed fleet capability, ensuring we have a decisive edge to execute the mission.” 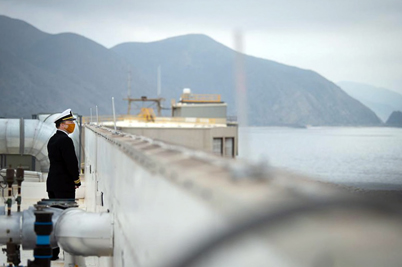 On watch: Lt. Cmdr. Levi Jones looks from DESIL toward the Pacific Ocean.

’Ensuring that laser weapons are sustainable’

“We’ve been looking forward to getting this out here because this is a different environment, and this is a stressing environment, not just for the building but also for the lasers and their systems. So it gives us the ability to test in the environment that we’re going to deploy in, making sure these weapons are going to be out there and sustainable for the future.”

Michael Ladner, NSWC PHD acting technical director, also emphasized what DESIL means for the future of the Navy and the accomplishment of completing the construction of the building.

He commented, “Our ability to go test, support and understand how to do maintenance and operations on these systems, and the fact that it was built in less than two years, is just amazing; and it’s very timely for us to get systems in here and start being able to do the missions.”

“The adversarial threats faced by the Navy today are so stressing that if we don't have facilities like this, we are simply not going to be able to keep pace,” said Vance Brahosky, NSWC PHD deputy technical director. “The directed energy and high-power microwave technology testing that can now be done in this facility will allow us to evaluate and field warfighting capabilities so that our ships can fight and win.”

He added, “The speed of warfare has increased so dramatically and exponentially over the last several years that one of the best ways that our fleet is going to be able to fight and win is with speed-of-light laser technology-types of weapons.”

As a result of the collaboration between NSWC PHD, Naval Base Ventura County, Point Mugu and industry partners, DESIL will serve multiple purposes. “This building also allows us to do that experimentation and practice and innovation, not just with ourselves, but with our partners in industry and academia and enterprise partners, such as Naval Surface Warfare Center, Dahlgren Division (Virginia),” said Ladner said.

The project broke ground on May 5, 2020, with Harper Construction of San Diego constructing DESIL through a Military Construction contract with an estimated cost of around $23 million.