US Navy fires laser weapon in Gulf of Aden 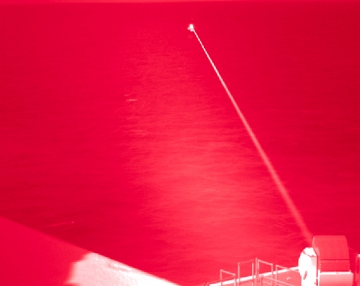 A US Navy ship has carried out the latest test firing of a high-power laser weapon, in a demonstration of the technology in the Gulf of Aden.

That is the same system that was used to down an unmanned aerial vehicle (UAV) in May last year, while the USS Portland was in the Pacific Ocean.

Back in 2015 the US firm signed a contract worth up to $91 million to deliver a core laser module for LWSD with 100-150 kW output power, at a Technology Readiness Level (TRL) of 6.

Guy Renard, director and program manager of directed energy at Northrop Grumman’s Aerospace Systems division, said at the time of that contract award:

“For about the price of a gallon of diesel fuel per shot, we're offering the Navy a high-precision defensive approach that will protect not only its sailors, but also its wallet.”

The system has been designed with a view to future installation aboard “DDG 51” class destroyers, with minimal modifications, and it is hoped that such lasers will eventually protect a wide array of naval platforms from advanced surface and air threats.

According to the US Navy, the USS Portland is part of the Essex Amphibious Ready Group that departed San Diego in August and began operating in what is known as the 5th Fleet region in September.

“The region's geography, climate, and strategic importance offer a unique environment for technology innovation,” it added in a brief statement about the laser firing.