by Matthew Peach in Antwerp 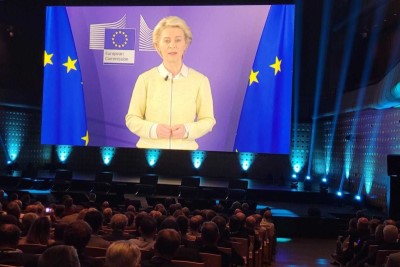 The opening day of this week’s Future Summits meet in Antwerp, Belgium – imec’s “flagship event” on nanoelectronics advances and deep-tech solutions – saw a range of presentations not only by the research center’s specialists and commercial partners but notable figures from politics and global initiatives.

von der Leyen’s virtual address was followed by a live (but also remote) delivery by Intel CEO Pat Gelsinger, whose company has recently made eye-catching announcements of multi-billion dollar investments in chip production facilities in both Magdeburg, Germany and in Ohio, in the USA.

“The aim of the European Chips Act is simple. By 2030 20% of the world’s microchip production should be in Europe. That’s twice as much as today in the market that is set to double in the next decade, which means quadrupling today’s European production,” she said.

“The ECA will back this ambition with considerable investment. It will enable more than 12 billion euros in additional public and private investment by 2030 on top of more than 30 billion euros of public investment. The future of our economy depends on chips and I want Europe to reclaim a global leadership role in the semiconductor industry.”

She then unpacked some of the key measures of the ECA: “First we will build on Europe’s strength in the parts where we are global leaders; second, we will fill some crucial gaps we still have to become a stronger player all along the chips’ long chain; and third, we will expand our global network of partners to strengthen Europe’s supply chains.”

She acknowledged the importance of imec in this plan, saying: “There is no better place than imec to talk about Europe’s existing strengths. Researchers at imec work on chips made from processes that are two or three generations ahead of the current forms of batch manufacturing.

“Today you are focusing on a new generation of chips that are more energy efficient and climate-friendly. Europe is the world’s center for semiconductor research and the ECA will support investment in Europe’s leadership on research and development, focusing for instance in transistors below 3nm as well as technologies for AI.”

von der Leyen also gave an explanation for the EC’s decision to develop the ECA: “During the pandemic, entire production lines here in Europe came to a standstill because some factories in East Asia were locked down. For leading nations’ chips to be completely dependent on a small number of producers and countries is a situation that is not necessary, nor is it good.

“With the Chips Act, we are adapting our scaling approach to these circumstances. We will allow public funding for first-of-a-kind production facilities, which do not yet exist in Europe. And it will be more attractive for private investment. Europe is the right place to invest.” 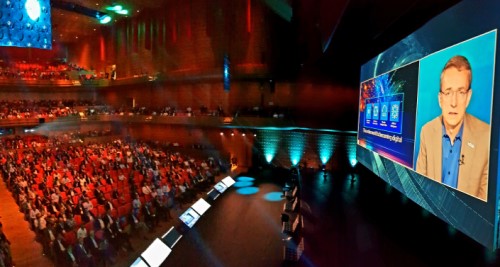 Next up was Pat Gelsinger, CEO of Intel, calling in live to the Future Summits from his Sant Clara HQ. His talk’s theme was the need for collaboration between policymakers and industry, which he deems essential for Europe’s digital future. He echoed Ursula von der Leyen’s observation that “there is no digital without chips.”

“She is right. As cars are being transformed into computers on wheels, and consumer appliances have turned into intelligent, connected devices, they all have one thing in common: They rely on high-tech semiconductors.

Gelsinger added, “Empowering private companies and governments to work hand-in-hand can radically advance Europe’s position in the semiconductor sector and bring cutting-edge manufacturing to the region.

“Europe has already proven it can drive continent-wide innovation programs through alliances of policymakers, R&D clusters, and private industry. A similar alliance for semis will now help rebuild a state-of-the-art European chip industry that includes more manufacturing but also extends out into the ecosystem.

“Full-scale investment in R&D and partnerships with European institutions will help bring this circle of innovation back home. The private sector, including Intel, plans to play an essential part in making this happen.”

Gelsinger also discussed how private – public partnerships can create thousands of jobs and deliver economic benefits throughout the EU economy and “help create world-changing technology to improve the life of every person on the planet.” 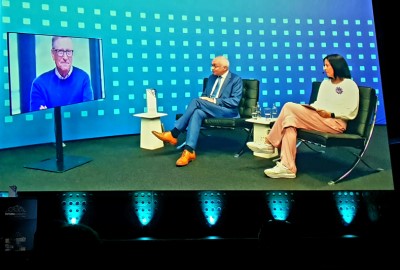 Earlier on day one, Luc Van den hove, President and CEO, imec, had made the official presentation of his organization’s 2022 Lifetime of Innovation Award, to honor Bill Gates, the co-founder of Microsoft, co-chair of the Bill & Melinda Gates Foundation and founder of Breakthrough Energy, “for his impact on the computer software revolution”.

“Bill Gates is truly a game-changer in personal computer software. He made his dream ‘a computer on every desktop and in every home’ come true, effectively changing the way we live and work. The software innovations he pioneered, boosted the semiconductor industry with improved computer power, less power consumption, better graphics and a smaller footprint.

“They effectively fueled Moore’s Law. Bill Gates’ amazing realizations, vision and mission to create a more sustainable world for everyone, are an inspiration to all of us. It is an honor for imec and our global community to grant this award at our event,” said Van den hove.