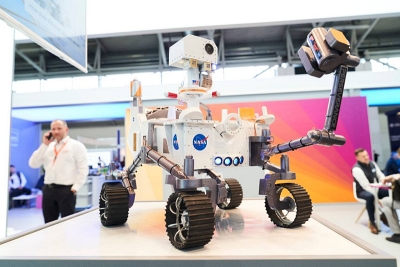 Optics and photonics giant Jenoptik has reiterated its expectation that company revenues will grow by at least 20 per cent this year, after strong sales and order intake in the opening quarter of the year.

As the titles imply, the first two of those divisions include photonics-related technologies - with advanced photonic solutions comprising by far the largest part of the business.

Jenoptik said that this largest unit, formed from its former “light and optics” and “light and production” divisions, posted sales of €157 million in the three months ending March 31.

That figure was up more than 50 per cent on the same period in 2021, and accounted for about three-quarters of total company turnover.

Semiconductor industry demand
CEO Stefan Traeger hailed the successful start to the year, and said that annual sales should grow by “at least” the 20 per cent previously forecast.

“We saw strong growth in revenue, both organically and non-organically, but also in earnings, and order intake,” Traeger said.

Jenoptik’s quarterly report backed up that outlook, showing order intake of €233 million for the advanced photonic solutions division, up more than 60 per cent year-on-year.

Rising demand from the semiconductor industry is a key element of that trend, and Jenoptik is also investing heavily in this area. Construction of a new facility in Dresden is due to begin before the end of 2022, although production at the site is not expected to start until early 2025.

At the recent LASER World of Photonics trade show in Munich, Jenoptik unveiled part of its response to increasing demand, showing off a new optoelectronic probe card called "UFO" that combines an optics module for functional testing of photonic integrated circuits (PICs) with a classic needle tester for electronic components.

Aside from the ongoing semiconductor industry pull, Jenoptik said that sales for biophotonics and industrial applications were up year-on-year.

Thanks partly to strong margins on the more recently acquired businesses, the company is also expecting to post higher profits this year - although it warned that this outlook assumed no further escalation of impacts caused by Russia’s invasion of Ukraine.

“The war in Ukraine and the sanctions it has triggered may primarily impact on energy supplies to our European locations and on energy prices,” Jenoptik stated, adding: