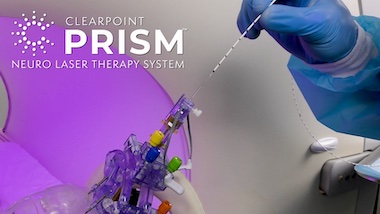 A clinical trial to examine use of a ClearPoint Neuro laser therapy platform as part of treatment for glioblastoma tumors in the brain has enrolled its first patient.

The study will assess "a minimal invasive neurosurgical approach with a MRI-based guidance system for the planning, navigation, intracranial access, placement and confirmation of the laser applicator," prior to ablation of the tumor.

The first of five planned patients was enrolled at Skåne University Hospital (SUS) in Lund, Sweden, in a trial employing the ClearPoint Prism Neuro Laser Therapy System and planned to run until the end of 2023.

ClearPoint Neuro has exclusive global rights to commercialize a laser therapy platform from Clinical Laserthermia Systems (CLS), a Lund-based developer of laser systems for use in cancer care and neurosurgery. CLS received FDA approval for its MR-guided laser ablation system to be used in the US in September 2022.

"The clinical trial with minimally invasive laser thermal treatment of patients with recurrent malignant brain tumors, glioblastoma, has now started at Skåne University Hospital and the treatment of the first patient could be carried out as planned," commented Peter Siesjö of SUS. "The treatment was performed, for the first time in Sweden, in a MRI suite in order to avoid transporting the patient between surgery and the MRI suite."

Laser-based approaches to treatment of neural diseases such as glioblastoma have been a topic of research for some time, given the aggressive form of brain cancer involved and the challenges in reaching the site of malignancy with conventional surgical techniques.

In 2018 Minnesota-based medical laser system developer Monteris Medical developed its NeuroBlate laser ablation system, primarily targeted at treatment of brain lesions that recurred following radiosurgery for metastatic brain tumors. In September 2022 the company announced the start of its own clinical trial into Neuroblate as an early intervention for brain metastases.

The laser ablation approach to glioblastoma treatment employs a 1064-nanometer source to perform laser interstitial thermal therapy, in which the surgeon navigates a laser wire towards a desired point in the brain, guided by MR imaging. Once the wire is in place, heat is used to destroy the region.

Performing a neurosurgery procedure while the patient remains in a MRI scanner increases the ability of the surgeon to see exactly where treatment is applied, an approach which also makes use of current trends towards miniaturization in laser probes and associated hardware.

"The ClearPoint Neuro Navigation System offers an efficient one-room solution that helps neurosurgeons in the United States to accurately place laser fibers and help treat brain tumors, radiation necrosis and epileptic foci in thousands of patients," said Joe Burnett of ClearPoint Neuro."Expanding brain and spine laser therapy treatment options for patients and neurosurgeons in the EU, and beyond, is a key priority in the years ahead."