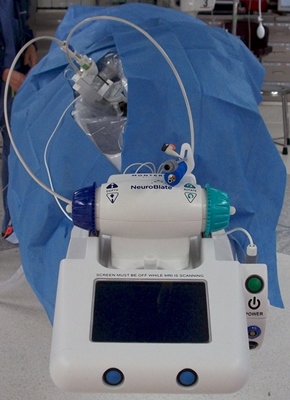 Monteris currently markets its “NeuroBlate” system in the US and Canada as a surgical tool, saying that it provides neurosurgeons with an alternative to traditional craniotomies.

The latest funding round comes nearly a year after the company agreed a $10 million loan deal with Oxford Finance, while the Neuroblate system is being evaluated as a potential new treatment for glioblastoma multiforme (GBM), an aggressive form of brain cancer.

That Phase 1 trial is taking place across five clinical sites in the US, with results expected after its conclusion in 2019.

The Neuroblate system is built around an Nd:YAG source, and can be used to ablate, necrotize, or coagulate soft tissue, with treatment of certain forms of epilepsy emerging as another potential application.

Investor experience
GBM is regarded as a particularly malignant form of cancer, characterized by rapid reproduction of tumor cells fed by large networks of blood vessels. The laser interstitial thermal therapy (LITT) treatment option offered by Neuroblate is seen as a much less invasive alternative to the open craniotomomies that surgeons currently use.

Monteris CEO Martin Emerson said in response to the latest funding round: “We were very pleased with the level of interest we received through our fund raising process. The success of this financing is a strong indication of the long-term value proposition that our current investors, as well as the new investors we were fortunate enough to attract, all see in the Monteris opportunity.”

The financing will support “significant” investments in research and development, clinical research, and commercial expansion, added the firm, with CFO Jim Erickson noting that the new investors have particular experience in the medical sector.

“We are thrilled to be adding two high quality and successful medical technology investment firms like Versant Ventures and SightLine Partners to our investor base,” he said in a company statement. “These two firms bring a track record of adding real value to their portfolio companies.”

Other medical equipment startups currently backed by Versant include California-based AcuFocus, which has developed intraocular implants for presbyopia treatment, while the venture house has enjoyed prior success with two ultrafast laser companies: vision correction specialist IntraLase and the cataract surgery pioneer LenSx Lasers.