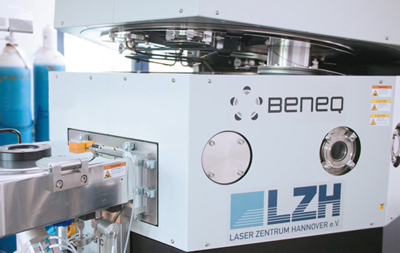 Fast, high uniformity and superb coating quality – these properties not only apply to physical vapor deposition methods but also to atomic layer deposition (ALD). Espoo, Finland-based developer of ALD systems and processes Beneq and Laser Zentrum Hannover (LZH) have teamed up to develop a new spatial ALD system that can be used to “coat complex-shaped optics at an unprecedented speed”.

Beneq’s ALD system known as C2R achieves speeds of up to 200 rpm with deposition rates of up to 1 µm/hour. LZH notes that ALD is a self-limiting and isotropic process, producing approximately 1 Angstrom of layer thickness per cycle. This allows immense control over the film thickness and the ability to deposit highly conformal films on complex 3D objects and nanostructures, like for example waveguides, lenses and domes.

The heart of the spatial ALD system is a turntable that eliminates the need for temporally separated gas dosing as used in batch ALD systems. Instead, pressure and nitrogen curtains geometrically separate four zones within the system. One rotation of the turntable corresponds to one cycle of ALD, exposing the samples to necessary reactants at separate points during the rotation.

Beneq has developed the system together with LZH to meet the needs for emerging optical coatings. “We were surprised by its [ALD] simple adaptation to optical coatings,” commented LZH’s Head of Optical Components Department, Dr. Andreas Wienke.

“For example, think of a strongly curved, small aspheric lens. With classical PVD processes, it is nearly impossible to achieve a conformal coating on the curved surface and the same reflection or transmission values over the whole area. With ALD, it seems so simple and easy to achieve.”

LZH’s own in-situ monitoring tool has been implemented recently to improve the C2R’s capabilities. “The broadband monitoring system BBM of the LZH takes complex coatings to the next level. The high-resolution monitoring of the layer growth allows not only to measure online but also to re-engineer the coating on-the-fly, yielding very precise and reproducible thin films,” said Sami Sneck, VP of Advanced ALD at Beneq.

“With the new BBM and loadlock additions, we are glad to offer a highly-effective tool to our customers, making ALD even more reliable for optical coatings.”

Spatial ALD matches PVD processes like ion beam sputtering in many aspects, including speed and optical performance. It can play to its full advantage when it comes to coating complex shapes and nanostructures. It therefore offers economical and reliable coatings for use in mobile phone cameras or lidar systems in self-driving vehicles.

Currently, the LZH is working on coating optical grating structures and polymer optical lenses for use in virtual and augmented reality glasses with the spatial ALD approach.

The following video gives a deeper insight into the cooperation between LZH and Beneq: