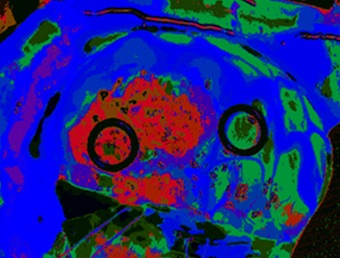 Hyperspectral imaging, where data is captured over several contiguous narrow spectral bands, rather than the three distinct color bands of a conventional camera, is an attractive technique in medical treatment and diagnosis thanks to its non-contact and minimally invasive nature.

HELICoiD, a collaborative project co-funded by the European Union under its 7th Framework Programme, was created to investigate the use of hyperspectral imaging in cancer diagnosis, in particular the real-time discrimination between healthy and malignant tissues in brain cancer. The project, named for HypErspectraL Imaging Cancer Detection, aimed to model how cancer affects the hyperspectral signature of tissues, assisting clinicians in making a traditionally difficult distinction.

The HELICoiD demonstrator included two hyperspectral cameras, one in the 400 to 1000 nm range and the second covering 900 to 1700 nm. Using a dataset of hyperspectral images from healthy and cancerous tissue, an algorithm was trained to detect differences in the spectral signature using machine learning techniques, and then applied to images acquired during surgery.

Gustavo Marrero Callico, project coordinator at the University of Las Palmas de Gran Canaria, commented that HELICoiD was the first attempt to apply hyperspectral imaging to the classification of human brain cancer in real time, and the positive results it obtained would now hopefully be carried forward into larger clinical trials and translation.

"Inter-patient variability is known to be significant, requiring extra effort to design a robust algorithm able to perform accurate classifications even in the presence of noise and biological fluctuations," said Callico. "We also had to accelerate the algorithms using parallel platforms, in order to provide an accurate classification in an acceptable time period of less than one minute. As a result the developments made by HELICoiD have been obtained thanks to the tight work of a multidisciplinary research group, all aiming for a common objective although with very different professional training."

In three data acquisition campaigns carried out in Spain and the UK, the HELICoiD demonstrator and subsequent algorithm analysis provided a very good correlation between the real positions of the tumors seen by clinicians and the automatic predictions of the tumor margins made by the system.

Clinical translation and hyperspectral medicine
"Hyperspectral systems could greatly improve tumor removal during surgery, reducing the risk of disease recurrence and improving a patient's life expectancy," commented Callico. "A growing spectral database will also allow more accurate estimations of the tumor grade and the original precedence of the tumor during surgery, reducing the time needed for pathology examination."

More detailed tracking of cancer using hyperspectral tools may ultimately provide new information about the processes underlying the growth of a tumor. Few detailed hyperspectral medical images of the human body are currently available to the scientific community for research in this area, so an expanded database of hyperspectral images could be of value for studying brain cancer and for other medical purposes.

"Hyperspectral techniques can substitute for more invasive techniques used to examine tumors, such as those based on the injection of contrast agents for fluoroscopy or radio-isotopes for PET," noted Callico. "Moreover, the techniques used to accelerate the hyperspectral algorithms can themselves be extrapolated to other massive data processing applications. Similar systems could perhaps be used in the detection of other types of cancer, and we are currently developing a hyperspectral dermatologic system to allow an early detection of melanomas."

The next steps for the HELICoiD platform itself will include a detailed study of the relevant wavelengths needed for brain cancer detection, alongside the use of low-cost hardware accelerators and more efficient sources of light, all of which could potentially reduce the cost of the system. The project team is also seeking funding for a detailed clinical study of the system for a wider number of patients.

"The system shows high accuracy for glioblastomas, the most common cases of high-grade primary brain cancer, but we lack sufficient images of lower-grade brain cancer and secondary cancers of the lung, pancreas, and kidney," said Callico.

"As those types of cancers are less frequent, we need more samples in order to train our machine-learning algorithms, as well as more data to validate the results. But techniques based on hyperspectral images can now open new avenues for minimally-invasive diagnosis of several illnesses, extending the field of view of medical doctors beyond the visible range, and laying the foundations for a new branch of medicine that could be called hyperspectral medicine."