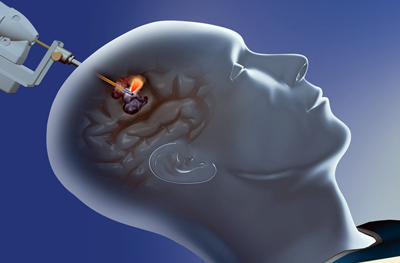 Monteris Medical, a pioneer in the emerging market for minimally invasive, image-guided laser ablation systems, has announced that favorable results from its LAASR (Laser Ablation After Stereotactic Radiosurgery) clinical study have been published in the Journal of Neurosurgery.

The LAASR clinical study enrolled patients with brain lesions that recurred following stereotactic radiosurgery for metastatic brain cancer. The recurring lesions — which ranged in size from 0.4 cm3 to 38.6 cm3 — were ablated with the Monteris Medical NeuroBlate System.

This patient population often has complex progressive medical issues and limited options, often leading to debilitating neurologic symptoms and deteriorating cognitive function causing progressive decline in their quality of life. The options for these patients, including open surgery and steroid drug therapy, may be limited and are often associated with high levels of morbidity.

The LAASR study results demonstrated that the potential benefits of LITT for such patients include stabilizing the quality of life and cognitive functions. Other benefits included reduced or eliminated steroid usage and shorter hospital stay. Monteris commented, “LITT can be effective in controlling both recurrent brain metastases and radiation necrosis, as shown by the primary outcome results of the trial on progression-free survival of 74% at last follow-up (12-26 weeks) and overall survival of 72% at 26 weeks.

Veronica Chiang, M.D., co-principal investigator, Department of Neurosurgery, Yale University, commented, "Given the side effect profile of alternative options for this patient population, the stabilization in the Karnofsky Performance Scale, preservation of quality of life, and reduction in steroid usage all represent positive outcomes of the LAASR study."

Manmeet Ahluwalia, M.D., co-principal investigator, of the Cleveland Clinic's Brain Tumor and Neuro-Oncology Center, added, "SRS is an effective first-line treatment for patients with metastatic brain cancer. However, for patients with recurrent disease that may not be appropriate for additional SRS or surgical resection, the LAASR study results indicate that LITT can be an effective option."

Martin Emerson, president and CEO of Monteris Medical, commented, "We appreciate the commitment of the physician investigators and their research teams who were involved in LAASR, as we fully recognize the critical importance of key opinion leader collaboration in developing and establishing new minimally invasive options for patients."

Monteris Medical will be exhibiting at the Society for Neuro-Oncology annual meeting in New Orleans, Nov. 15-18. Visitors to booth 101 can see a full demonstration of the NeuroBlate System.