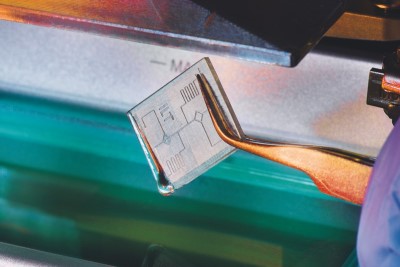 Sample component produced in a resin bath from the HoPro3D system.

Together with industrial partners, the Fraunhofer Institute for Laser Technology (ILT) has developed a novel system for producing high-resolution microcomponents by photo-crosslinking. Following the group’s work in the project “High productivity and detail accuracy in additive manufacturing by combining UV polymerization and multiphoton polymerization - HoPro-3D,” polymer microstructures can now be produced economically and customized in one machine.

The ILT worked together with LightFab, Bartels Mikrotechnik, and Miltenyi Biotec in the “HoPro-3D” project. They have developed a new type of 3D printer that combines rapid 2D exposure – scrolling digital light processing (DLP) – with a high-resolution laser process – multiphoton polymerization (MPP) – to produce microcomponents from photopolymers.

The HoPro-3D 3D printer has two selectable exposure systems, for either high build rates or high precision. The DLP module, which emits at 365 nm, exposes the basic structures of a microcomponent with a pixel resolution of 10μm. As a complement, a femtosecond laser and the MPP module can be used to write contour lines with a resolution of about 2μm.

The layer-by-layer approach makes it possible to build fine MPP structures on top of already printed DLP structures, thus creating extended components with a complex structure and high-resolution details. The built-up laboratory pattern allows the production of components with a footprint of up to 60 x 100 mm2. 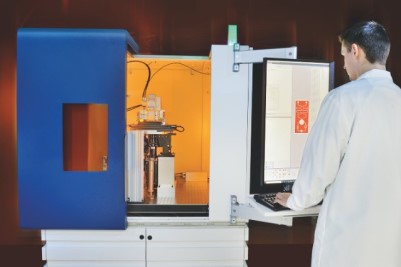 “The concept is in place and the corresponding machine has been built and already extensively tested,” said Dr. Martin Wehner, Head of the Biofabrication Group at the ILT. After completion in spring 2022, the laboratory prototype was tested and optimized in an application-oriented manner as part of the Fraunhofer SiCellNet network.

The SiCellNet cluster forms a central point of contact for research into new tools and manufacturing techniques for the analysis, sorting and provision of living cells. The performance of the combination plant and the control of the process could thus be optimally expanded.

In the follow-up project “Precise assembly by high resolution seamless 3D printing - PANDA,” funded by the SME Innovation Program, the ILT team has been expanding the performance of DLP-based processes since January 2022. The knowledge gained there will later be applied in the HoPro-3D system to continuously improve the economic efficiency of the 3D printing process.

Warehouses are invariably home to heavy volumes of traffic, such as trucks or forklift vehicles traversing the aisles. Under such conditions, especially where people are also working on the shopfloor, the risk of accidents is great. Optical sensors on these vehicles can provide warehouse staff with better protection from collisions. 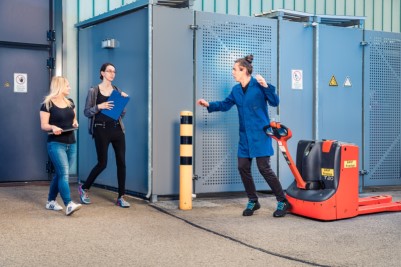 Danger zone: in warehouses, vehicles cause accidents far too often.

Based in Zwickau, Germany, the AZOM is a branch lab of the Fraunhofer Institute for Material and Beam Technology (IWS). Specially designed optical sensors from AZOM are aiming to reduce transport accidents involving industrial trucks. For this development, partner BASF provided two pallet trucks.

Dr. Christian Fischmann, who oversees vehicle engineering at BASF in Ludwigshafen, commented, “Every day, there are hundreds of industrial trucks traveling around our factories and warehouses. Working with AZOM, we are keen to integrate safety technology into our vehicles so that we can give our employees even better protection.”

“Our system is designed to protect users from being crushed by machinery, especially in the area around their feet,” said Prof. Peter Hartmann, director of Fraunhofer AZOM. “To achieve this, our research team has developed a special proximity sensor that detects when an operator is too close to the hazardous area in front of a vehicle, and then applies the brakes.”

Laser pulses are emitted with a defined length and distance between them and then reflect off obstacles, a process that produces information about how far away objects are. A real innovation in the system is its ability to combine information from multiple directions in space and continuously monitor a fan-shaped area around a pallet truck, which is provided by BASF.

The signal from a second optical sensor that responds to pressure is processed using the information about distance from objects – something that has been achieved thanks to the collaboration with Kinotex. The sensor, which is tactile, is able to stop the vehicle and automatically move it back slightly, preventing the operator from becoming crushed.

BASF is already showcasing both prototypes at specialist conferences and trade fairs – with users and manufacturers alike showing a keen interest. “This technology can be used in practically any transportation vehicle, but it’s a particularly intriguing prospect for autonomous vehicles,” said Dr. Christopher Taudt, Surface Metrology group manager at AZOM.

“Currently, we’re working on the idea of integrating the sensors into a kind of retrofittable sensor strip rather than making them a fixed part of the vehicle. That would allow them to be added to vehicles of any type from a whole range of manufacturers,” he said.