Webb wows with new view of the 'Pillars of Creation'

Near-infrared camera on board JWST is able to peer through the towers of interstellar dust captured in Hubble’s iconic image. 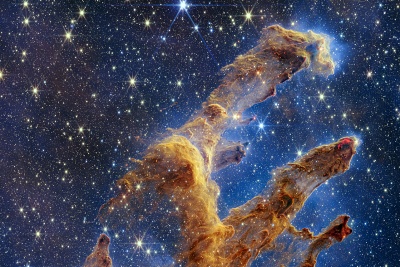 The near-infrared camera (NIRCam) instrument on board the James Webb Space Telescope (JWST) has returned an updated and even more spectacular image of the iconic “Pillars of Creation”, first captured by the Hubble Space Telescope nearly three decades ago.

Thanks to its ten mercury cadmium telluride (MCT) detector arrays, NIRCam is able to capture wavelengths between 600 nm and 5 µm.

This means that the instrument, built by Lockheed Martin and the University of Arizona, can image younger, cooler red stars, and partially see through the interstellar dust that dominated Hubble’s images of the star-forming region.

As a result of that and a much sharper camera resolution, JWST’s newly captured images look even more spectacular than even Hubble’s updated 2014 image of the same region - capturing far more detail, and even ejections from stars that are still forming within the gas and dust.

Star formation models
NASA says that the latest images should help researchers to refine their models of star formation, by identifying more precise counts of newly formed stars, alongside the quantities of gas and dust in the region.

“Over time, they will begin to build a clearer understanding of how stars form and burst out of these dusty clouds over millions of years,” stated the space agency.

Unusually this latest image from JWST contains no galaxies. That’s because even though NIRCam is able to partly see through interstellar dust clouds, the Pillars of Creation is in fact a tiny patch of the sky located in the Eagle Nebula, right in the densest part of the Milky Way galaxy’s disk - and blocking the view of the deeper universe.