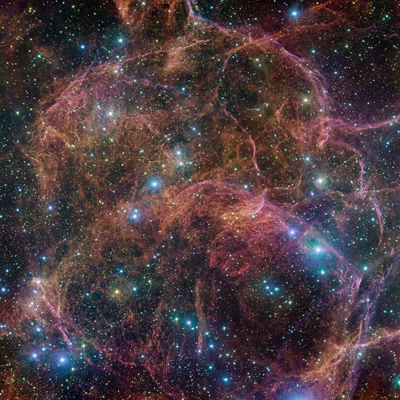 A “spooky spider web…”, according to astronomers at the European Southern Observatory, “…or perhaps magical dragons or wispy trails of ghosts?” What do you see in this image of the Vela supernova remnant? This tapestry of colors, published today on October 31st, shows the ghostly remains of a gigantic star, and was captured in incredible detail with the VLT Survey Telescope, hosted at the European Southern Observatory’s (ESO’s) Paranal site in Chile.

The wispy structure of pink and orange clouds is all that remains of a massive star that ended its life in a powerful explosion around 11,000 years ago. When the most massive stars reach the end of their life, they often go out with a bang, in an outburst called a supernova. These explosions cause shock waves that move through the surrounding gas, compressing it and creating intricate thread-like structures. The energy released heats the gaseous tendrils, making them shine brightly, as seen in this image.

In this 554-million-pixel image, viewers get an extremely detailed view of the Vela supernova remnant, named after the southern constellation Vela (The Sails). For comparison, ESO stated, “nine full Moons would fit in in the entire image, and the whole cloud is even larger. At only 800 light-years away from Earth, this dramatic supernova remnant is one of the closest known to us.”

As it exploded, the outermost layers of the progenitor star were ejected into the surrounding gas, producing the spectacular filaments that we observe here. What remains of the star is an ultra-dense ball in which the protons and electrons are forced together into neutrons — a neutron star. The neutron star in the Vela remnant, placed slightly outside of this image to the upper left, happens to be a pulsar that spins on its own axis at an incredible speed of more than 10 times per second.

The ESO image is a mosaic of observations taken with the wide-field camera OmegaCAM at the VLT Survey Telescope, hosted at ESO’s Paranal Observatory in Chile. The 268-million-pixel camera can take images through several filters that let through light of different colours. In this particular image of the Vela remnant, four different filters were used, represented here by a combination of magenta, blue, green and red.

This image is an example from such a survey: the VST Photometric Hα Survey of the Southern Galactic Plane and Bulge (VPHAS+). For the past seven years, this survey has mapped a considerable portion of our home galaxy, allowing astronomers to better understand how stars form, evolve and eventually die.

The VST is owned by The National Institute for Astrophysics in Italy, INAF, and with its 2.6-metre mirror it is one of the largest telescopes dedicated to surveying the night sky in visible light. 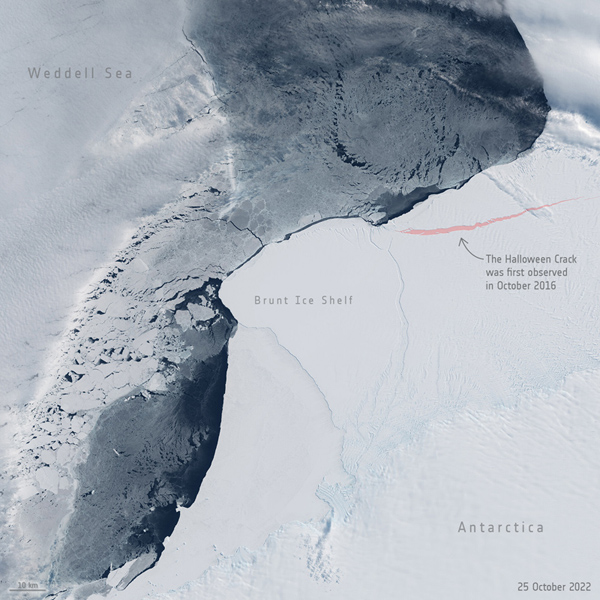 First spotted on 31 October 2016, the Halloween Crack runs from an area known as McDonald Ice Rumples – which is where the underside of the floating ice sheet is grounded on the shallow seabed. This pinning point slows the flow of ice and fractures the ice surface.

The Halloween Crack, which is currently stable, runs adjacent the more precarious tip of Brunt Ice Shelf. This tip of the shelf is hanging by a thread – now only held in place by a narrow strip of ice around 600 m long at the northern end of the long chasm cutting through the western and remaining eastern part of the ice shelf. If and when this potential rupture point finally gives way, it is expected to spawn a huge iceberg about 1750 square kilometres, which is over five times bigger than the size of Malta.

Ice shelves float so when they calve icebergs the bergs do not actually add to sea-level rise. However, ice shelves act as a brake on how fast the glaciers on the land flow to the sea. Owing to climate change, Antarctica’s ice shelves are weakening, leading to greater risks of more land ice ending up in the oceans and thereby adding to sea-level rise, something arguably more frightening than Halloween.

Routine monitoring by satellites with different observing capabilities offer unprecedented views of events happening in remote regions like Antarctica, and how ice shelves are coping in response to changes in ice dynamics, air and ocean temperatures. The image was captured by the European Space Agency (ESA), on 25 October 2022.