NASA and its optics partners have made astronomical history for all of humanity. 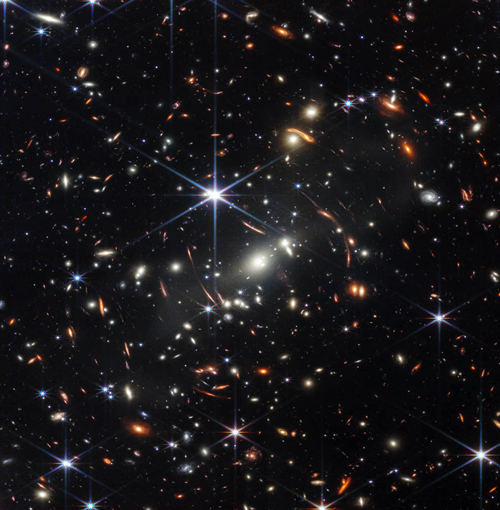 A long time ago and far, far away... The first image sent from the James Webb Space Telescope.

Champagne corks are popping. Ice cream trucks are rolling in. The 300-plus partners in the James Webb Space Telescope, or JWST, are celebrating across Europe, Canada and the U.S., after its success Monday in delivering a high resolution image of some of the earliest galaxies.

The image, posted by NASA, shows the dawn of galaxies nearly 14 billion years ago. With that, the Webb project has ensured its own place in history. The space photo resembles a dazzling stage backdrop for a Broadway show. Viewers saw starlike elements in striking colors, set against a black sky. In fact, the preview image, with the title Webb’s First Deep Field shows a handful of galaxies, identified as SMACS 0723.

On Tuesday, July 12th, more images were set to be released.

In Washington, President Joe Biden on Monday evening hosted a preview video event with a few journalists. He called the Webb “this miraculous telescope” that would bring “light from where stars were born.”

Those ice cream trucks were summoned at the Teledyne Imaging Sensors plant, which did much of the Webb’s actual design, fabrication and testing at its site in Camarillo, north of Los Angeles, California. Company president, James W. Beletic, said the release of JWST’s “first science” was “so wonderful that all humanity should rejoice.”

In Palo Alto, California, at Lockheed Martin’s Advanced Technology Center, its vice president, Nelson Pedreiro, was in high spirits. The Webb’s first image was supplied by the NIRCam – the Near Infrared Camera – which was built at the Center’s labs (and first reported by optics.org in 2013).

Pedreiro commented, “Seeing Webb’s first image – from NIRCam no less – today is incredibly special and a little surreal. The Webb is the culmination of many, many years of hard work by Lockheed Martin and the University of Arizona, among numerous others.”

The NIRCam’s images, he said, “will help rewrite textbooks.” 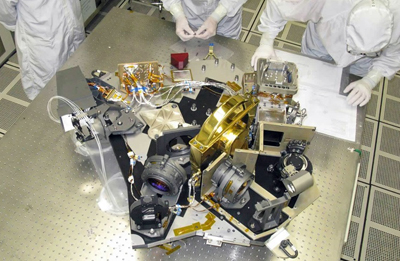 NIRCam was also used to align the 18 segments that form JWST’s primary mirror, which is critical to the performance of all science instruments on JWST. Pedreiro called NIRCam “by far the most precise infrared instrument we’ve ever built.”

He spelled out Lockheed Martin’s approach: “It combined special optical materials compatible with infrared light; extremely precise control of the shape, dimensions and positioning of the optical components; and ultra-sensitive infrared detectors – image distortions are minimized and the light throughput and sensitivity are maximized.

“By these methods, NIRCam can sense extremely faint infrared light from extremely distant objects like the first stars and galaxies to form after the Big Bang, compared to other infrared instruments. NIRCam uses an innovative refractive design that leads to a compact instrument,” he said.

“To make it work, Lockheed Martin developed a new optical alignment process and new technologies to mount the various optical components, some of them quite fragile, in ways that protect them from the rigors of space travel such as extreme vibrations, loads and temperature changes, while maintaining their precise shapes and locations,” Pedreiro said.

Because Earth’s atmosphere blocks out distant infrared rays, any images have to be gathered by infrared cameras out in space. And the JWST supplied them, with new technology sailing along a million miles away. The Webb project, a partnership with NASA, the European Space Agency and the Canadian Space Agency will reveal spectroscopic data along with the full-color images.

• The set of first-round images from the Webb is to be released at 10:30 a.m. EDT Tuesday, July 12, in a live broadcast on NASA Television. The images will be available at: www.nasa.gov/webbfirstimages

For Day One of Webb’s general science operations on Tuesday, the Webb partners, along with the Space Telescope Science Institute, based in Baltimore, Maryland, on a campus of the Johns Hopkins University, has selected the following images of cosmic objects: 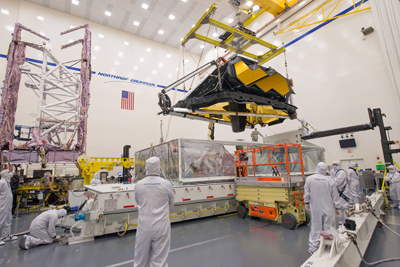 So how is the Webb superior to earlier telescopes?

“The Webb telescope is the largest space telescope ever launched by astronomers,” said Marcia Rieke at the University of Arizona and principal investigator for the near-infrared telescope.

“It has nearly six times the light-gathering power of Hubble and can detect light over 10 times longer in wavelength than Hubble. Webb is also equipped with powerful spectrometers in addition to its cameras. NIRSpec (the Near Infrared Spectrograph) has a multi-slit capability, so spectra of up to 200 sources can be taken at once.”

And what were Webb team members thinking on their big day?

“We have worked on this project for over 20 years, and to see results as spectacular as these is immensely satisfying,” Rieke said. “The beauty and significance of these images makes all the hard work worth it. We are all going to be amazed by what this telescope shows us.”

From here, the Webb is moving into routine operation. “More than a year's worth of observing plans are already chosen,” Rieke said. “We can look forward to many more releases of beautiful images and discoveries.”