Engineers from Ball Aerospace, Space Telescope Science Institute, and NASA to use data taken with NIRCam to ready the scope. 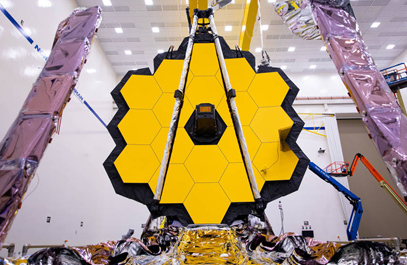 The James Webb Space Telescope (“Webb”), launched on December 25th, 2021, is now just days away from aligning its 18 mirror segments to operate as a single mirror.

When the camera called NIRCam reaches about minus 153 Celsius (244 deg F), likely later this week, Webb’s optics team will begin meticulously aligning the telescope's 18 primary mirror segments to work together as a single surface.

NASA is targeting a star called HD84406, about 258 light years away, to begin this process. It will be the first object NIRCam sees when photons of light hit the instrument's powered-on detectors.

However, the star will not be the first image that is shared with the public. That object has not been chosen yet, and NASA will likely release the image this summer.

Webb reached its orbital destination on January 24th, when the mission operations team powered on all of the telescope’s science instruments, including its primary camera, the Near Infrared Camera, or NIRCam.

The cameras will allow Webb to peer deeper into the cosmos than ever before and collect light from the earliest stars, galaxies, nebulous stellar nurseries, planetary atmospheres and more.

The final three instruments – including NIRCam – were turned on in the past few days. After the powered-on instruments undergo initial checks, the mission operations team's next major step is to turn off instrument heaters. The heaters keep critical optics warm to protect them from water and ice condensation.

NIRCam was assigned the task of aligning the telescope because it was built to observe shorter wavelengths of light than the other onboard instruments. Because of this, it can discern the most detail and is the most sensitive to misalignment.

“These first photos mean that we finally get starlight moving through the system and detected by NIRCam,” said Marcia Rieke, principal investigator. “NIRCam has not been turned on since before launch; this will prove the launch didn't introduce issues for how it can work.” 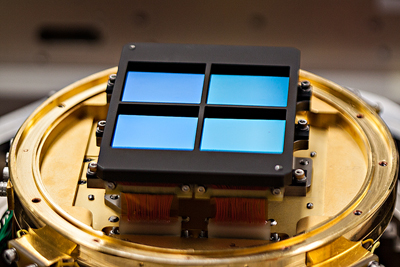 Sensor array for the NIRCam instrument. Click for info.

A team of engineers and scientists from Ball Aerospace, Space Telescope Science Institute, and NASA’s Goddard Space Flight Center will use data taken with NIRCam to progressively align the telescope.

The team developed and demonstrated the algorithms using a 1/6th scale model telescope testbed. They have simulated and rehearsed the process many times and are now ready to do this with Webb. The process will take place in seven phases over the next three months, culminating in a fully-aligned telescope ready for instrument commissioning.

The images taken by Webb during this period will not be “pretty” images like the new views of the universe Webb will unveil later this summer. They strictly serve the purpose of preparing the telescope for science.

To work together as a single mirror, the telescope’s 18 primary mirror segments need to match each other to a fraction of a wavelength of light – approximately 50 nm. To put this in perspective, if the Webb primary mirror were the size of the United States, each segment would be the size of Texas, and the team would need to line the height of those Texas-sized segments up with each other to an accuracy of about 40mm (1.5 in).

Scott Acton and Chanda Walker of Ball Aerospace, along with Lee Feinberg of NASA Goddard, described the basic steps: “With deployment of the mirror segments now complete, and the instruments turned on, the team has begun the numerous steps required to prepare and calibrate the telescope to do its job.

They added, “The telescope commissioning process will take much longer than previous space telescopes because Webb’s primary mirror consists of 18 individual mirror segments that need to work together as a single high-precision optical surface.”

The steps in the commissioning process include: