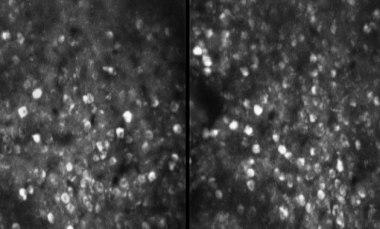 A project at the Kavli Institute for Systems Neuroscience (KISN) based at the Norwegian University of Science and Technology has announced new results in large-scale 2-photon calcium imaging in freely moving mice.

In a posting on twitter, KISN co-founder Edvard Moser said "We developed a 2.4-gram miniature multiplane 2-photon microscope recording 1000s of neurons in freely moving mouse, and used it to obtain the first topographic maps of all spatial cell types."

The KISN platform, termed a miniaturized two-photon microscope (MINI2P) by the Institute, offers a novel technique for successive imaging across multiple adjacent fields of view.

This enabled recordings from more than 10,000 neurons in the same animal. A focus of recent research in neuroimaging has been the simultaneous observation of activity across such large populations of cells, combined with the ability to do so while live animal subjects remain freely moving.

Development of 2-photon microscopy modalities has been a key part of these studies, with the technique's pioneers awarded the €1 million Brain Prize in 2015 in recognition of its impact.

Calcium imaging, whereby the activity of the neurons is monitored using fluorescent calcium markers interrogated using 2P microscopy, has also been crucial in these efforts, but investigators have mostly relied on stationary benchtop 2P microscopes where mice are head-fixed under the objective.

A lightweight miniaturised device such as the one now developed at KISN could point to a new generation of 2P devices more suitable for extended in vivo studies, with the resolution, speed, and scanning capability of benchtop microscopes being achievable on freely moving animal subjects.

In a preprint paper released by Moser, KISN stated that "the improved thermal stability and speed of the integrated scanning module of MINI2P enables true 3D functional imaging. We supplement these advances with a novel technique where adjacent FOVs are stitched together over successive recordings, increasing the yield of successively recorded cells to over 10,000."

MINI2P has also been made open-source, with KISN intending that it can be built in most imaging laboratories by following the detailed building instructions provided in the pre-print paper.

In addition, a method was developed in which successive images of neighboring FOVs could be aligned and stitched together, with steps taken to ensure that neurons caught in repeated images registered only once in the end result.

"With these strategies for increasing cell yield, MINI2P could more than double the number of simultaneously recorded cells compared to previous 2P miniscope versions, and the number could be increased more than tenfold over successive recordings," noted the team.

In trials, MINI2P collected large-scale proof-of-principle data from cell populations in the visual cortex, medial entorhinal cortex, and hippocampus of mice subjects, "demonstrating for the first-time high-resolution 3D functional imaging in freely behaving animals with stability across tens of minutes."

The results received enthusiastic approval from Stanford University's Karl Deisseroth, one of the pioneers of optogenetics procedures in which the firing of neurons is controlled by light, techniques for which Deisseroth received a share of the 2013 Brain Prize among other awards. Deisseroth said the results were "amazing."