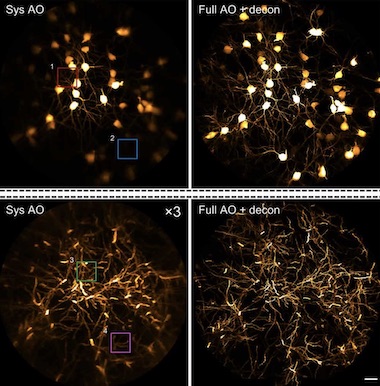 Recent studies of brain functions and neural activity have benefited from advances in two-photon microscopy, and the increased resolutions and functional imaging that the technique allows.

However, the two-photon approach suffers from extreme attenuation of both excitation and emission photons, limiting the tissue depth that can be analyzed and restricting imaging to the cortex of the brain. An endoscopic approach could be a better solution to probe deeper regions of the organ.

A project at the Hong Kong University of Science and Technology (HKUST) has now developed a two-photon endomicroscopy platform incorporating adaptive optics based on direct wavefront sensing, achieving diffraction-limited resolution in deep-brain imaging. The work was published in Science Advances.

"This technology enables imaging of other deep brain structures such as the striatum, the substantia nigra, and the hypothalamus," said Jianan Qu of HKUST. "It is an exciting development and holds great potential for understanding brain functions and facilitating neuroscience research in the deeper parts of the brain."

The new approach builds on the existing use of miniature gradient refractive index (GRIN) lenses in epifluorescence microscopy, implanted separately in the brain to act as a relay between the microscope objective and the sample below.

Two-photon techniques incorporating a rod-shaped GRIN lens have been tried before, according to the project's published paper, but intrinsic aberrations have limited the 3D imaging volumes achieved.

Adaptive optics (AO) is a well understood optical technique for assessing aberrations in an incoming wavefront and counteracting them, allowing the wavefront to then be accurately recorded, so HKUST employed an AO approach to achieve its high-resolution in vivo deep-brain imaging.

"Our approach is to use the two-photon excited fluorescence (TPEF) signal as the intrinsic guide star inside biological tissues," commented the project in its paper.

Structures and functions of the deep brain

Direct wavefront sensing provides accurate estimation of the aberrations, and is well suited for in vivo imaging using a GRIN lens once the intrinsic aberrations of the GRIN lens itself have been assessed, according to the team. A deformable mirror then creates compensatory distortions to the excitation light, yielding a potentially diffraction-limited focus inside the brain tissues.

In trials, the group utilized its AO two-photon endomicroscopy system to carry out in vivo imaging of the mouse hippocampus, resolving the dendritic spines in the structure and achieving "tremendous improvement in resolution after full AO correction, with dendritic spines as deep as 300 microns clearly resolved," noted the project team.

The neuronal plasticity in the hippocampus - changes in the neuronal structure in response to stimulation - was also studied using the platform. In particular the relationship between somatic and dendritic activity, two aspects of information processing by the neurons, was investigated.

A method to visualize changes in the number and size of dendritic spines will improve understanding of how neurotransmission is regulated during memory impairment or after treatment with therapeutic drugs, according to the researchers. A better understanding of the molecular basis of learning and memory and its deregulation in neurological diseases should follow.

"The ability to conduct live imaging of the deep brain at high resolution has long been a challenge," said Jianan Qu. "With adaptive optics two-photon endomicroscopy, we can now study the structures and functions of the deep brain at an unprecedented resolution, which will greatly accelerate our progress in understanding the mechanisms of neurodegenerative diseases and in developing related treatments."