Multispectral and thermal imagers on board Landsat 9 provide latest upgrade to near 50-year mission. 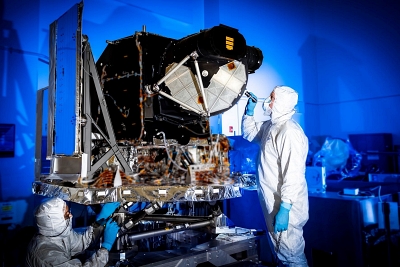 NASA has confirmed the successful launch of Landsat 9, the latest Earth imaging satellite for a mission that began nearly five decades ago.

Featuring two instruments with state-of-the-art optical and infrared sensing capability, Landsat 9 is expected to provide data and imagery to help with major environmental issues, such as water use, wildfire impacts, coral reef degradation, glacier and ice-shelf retreat, and tropical deforestation.

Landsat 9 joins its predecessor, Landsat 8, in orbit. NASA says that together the two satellites will collect images covering the surface of the entire planet every eight days.

Thomas Zurbuchen, associate administrator for science at NASA, said in a release from the administration: “Landsat 9 will be our new eyes in the sky when it comes to observing our changing planet.

“Working in tandem with the other Landsat satellites, as well as our European Space Agency partners who operate the Sentinel-2 satellites, we are getting a more comprehensive look at Earth than ever before.

“With these satellites working together in orbit, we'll have observations of any given place on our planet every two days. This is incredibly important for tracking things like crop growth and helping decision makers monitor the overall health of Earth and its natural resources.”

Between them, they measure 11 wavelengths of light reflected or radiated off Earth's surface, in a range spanning the visible and infrared spectrum between 433 nm and 12 µm.

As the satellite orbits, the instruments will capture scenes across a swath of 185 km, with each pixel representing an area about 30 m across - and therefore able to identify areas such as individual crop fields.

Ball Aerospace explains that OLI-2, which is virtually identical to the OLI-1 payload launched in 2013, combines a push-broom sensor with a four-mirror telescope to take measurements in the visible, near infrared and shortwave infrared (SWIR) spectral bands.

It will image the Earth every 16 days, in an eight-day offset with Landsat 8. Each day, the two satellites will add nearly 1500 new scenes to the US Geological Survey’s Landsat archive.

Photodetector tech
OLI-2’s photodetectors are divided into 14 modules, with around 7000 across-track sensors for each spectral band, as well as 13,000 for a pan-chromatic band covering 500-680 nm.

Each spectral band has a specific filter, with visible and near-infrared detectors based on silicon PIN diodes and the SWIR detectors fabricated from mercury cadmium telluride (MCT).

Makenzie Lystrup, VP and general manager at Ball Aerospace’s civil space division, said: “Our goal was to develop a technologically advanced solution that was both cost-effective and capable of delivering highly-calibrated multispectral imagery and improved land surface information. This launch is the culmination of a lot of hard work by a lot of talented people to achieve that goal.”

Like OLI-2, the dual-band TIRS-2 instrument also uses a push-broom sensor architecture, but is based on more advanced technology in the form of quantum well infrared photodetector (QWIP) arrays.

In effect, the cryogenically cooled focal plane is a linear array of 1850 pixels corresponding to the 185 km (115 mi) ground swath via a four-element refractive telescope.

NASA says that the TIRS-2 imager’s field-of-view is flipped between nadir (Earth) and both an internal blackbody and a deep-space view, to perform on-orbit radiometric calibration using a mirror controlled by a scene-select mechanism.