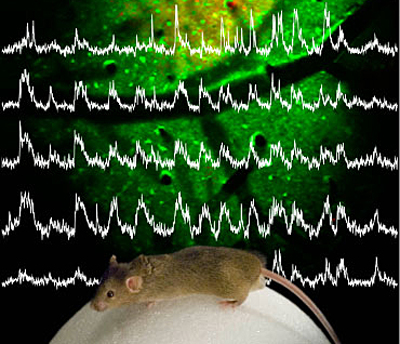 Neural activity recorded from neurons in the brain of an awake mouse.

The world’s most valuable (€1million) neuroscience prize, The Brain Prize has been awarded, to four scientists, Winfried Denk and Arthur Konnerth (all Germany), and Karel Svoboda and David Tank (USA), for the invention and development of two-photon microscopy, a transformative tool in brain research. The Brian Prize has been described as “Neuroscience’s answer to the Nobel Prize”.

The four researchers will share the €1million prize, which will be presented at a ceremony on 7 May in Copenhagen by His Royal Highness Crown Prince Frederik of Denmark.

Two-photon microscopy is one of a handful of techniques, which over the past 15 years, have dramatically changed the way the brain is understood. It combines advanced methods from physics and biology, to allow scientists to examine the finest structures of the brain, in real time.

Brain Prize founder the Grete Lundbeck European Brain Research Foundation, based in Copenhagen, Denmark, says this technique represents “a huge step forward in the understanding of the physical mechanisms of the human brain and in the understanding of how the brain’s networks process information. Furthermore, researchers have been able to follow how connections between nerve cells are established in the developing brain.”

Two-photon microscopy has led to identification of signaling pathways that control communication between nerve cells and provide the basis for memory, and it has enabled the study of nerve cell activity in those networks that controls vision, hearing and movement.

Professor Povl Krogsgaard-Larsen, Chair of Grete Lundbeck European Brain Research Foundation, commented, "Thanks to these four scientists we’re now able to study the normal brain's development and attempt to understand what goes wrong when we're affected by destructive diseases such as Alzheimer’s and other types of dementia. More than that, we are able to visualize how adaptive behavioral changes affect the nerve cells of living animals."

Winfried Denk was the driving force behind the invention of two-photon microscopy. With David Tank and Karel Svoboda he used the technique as an innovative tool to visualize activity at the level of the neurons' fundamental signalling units, the "dendritic spines”. Arthur Konnerth built on this invention to simultaneously monitor the activity in thousands of synaptic connections in living animals, and Karel Svoboda went on to use two-photon microscopy to map the changes that occur in the brain's network when animals learn new skills.

Since its invention in 1990, two-photon microscopy has formed the basis of more than 10,000 research papers, not only in brain research but also in other areas of physiology, embryology and tissue engineering.

Professor Maiken Nedergaard, of the University of Rochester Medical School, New York, said, “Traditionally, brain research made use of electrical measurements to study the activity of neurons. Two-photon microscopy has revolutionized the study of the brain, since it is now possible to map the function of the individual parts of a neuron as well as communication between several thousand neurons in live, behaving animals.”

Brainboxes: inventors of two-photon microscopy and winners of the 2015 Brain Prize.

However, the short wavelength, high energy UV-light tends to spread through, the tissue making more areas fluoresce and making it difficult to focus upon a specific cell or cell part. Furthermore, UV-light cannot penetrate deep into the tissue, and because of its high energy quickly exhausts the fluorescent molecules.

Two-photon microscopy uses pulsed infrared lasers to focus the illumination only on the target area, which is the only area which then emits light. “It’s like the difference between looking at a movie in daylight, and looking at a movie in a dark hall: if you take away the unwanted light you can see what you want to see much better”, said Nedergaard.