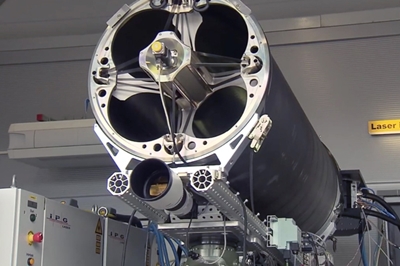 The UK’s Ministry of Defence (MOD) has awarded a £30 million contract to develop laser weapons technology to a consortium led by arms firm MBDA Systems – confirming rumors that first circulated in July 2016.

MBDA Systems, which is owned by a combination of Airbus Group, BAE Systems, and Leonardo Finmeccanica, heads up the “Dragonfire” consortium that is tasked with demonstrating a laser weapon system in just two years’ time.

2019 demo
Last September the MOD announced that it was in the process of “finalizing” the agreement with MBDA, with speculation that one of the rival bids involving the likes of Babcock, Raytheon, Thales, Lockheed Martin and Rheinmetall had appealed the initial decision and delayed the formal contract announcement until now.

“The project will assess innovative laser directed energy weapon technologies and approaches, culminating in a demonstration of the system in 2019,” said the MOD. “The contract will assess how the system can pick up and track targets at various ranges and in varied weather conditions over land and water, to allow precision use.”

The project will also inform decisions on the future of the program, and help the MOD’s Defence Science and Technology Laboratory (DSTL) establish a road map to an in-service capability. “If it is successful, the first laser weapons would come into service in the mid-2020s,” the MOD stated.

An MOD statement quoted Peter Cooper from DSTL saying: “This is a significant demonstration program aimed at maturing our understanding of what is still an immature technology.

“It draws on innovative research into high-power lasers so as to understand the potential of the technology to provide a more effective response to the emerging threats that could be faced by UK armed forces.” 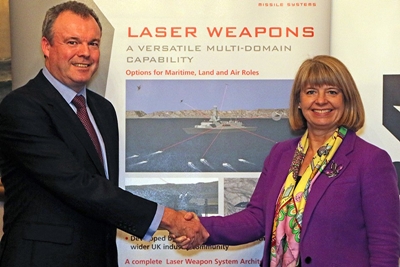 Laser expertise
Involved in the Dragonfire consortium are two of MBDA’s parent companies, in the form of BAE Systems and Leonardo-Finmeccanica GKN, along with Qinetiq, the defense technology development company spun out of DSTL, procurement specialist Arke, and aerospace firm Marshall ADG.

Both MBDA, largely through its German operation, and Qinetiq have extensive experience in the development of high-power lasers for potential weapons applications.

Back in 2012, MBDA Deutschland said it had built a 40 kilowatt laser “gun” based around the combined power of four 10 kilowatt fiber lasers provided by key partner IPG Photonics.

That demonstrator system was used to track and destroy artillery shell targets fired from a distance of 2 km, and at an altitude of 1 km, with MBDA saying at the time that it should be possible to build an 80 kilowatt system. A 100 kilowatt output has historically been quoted as the benchmark power required for effective military capability.

“In spite of often adverse weather conditions, including heavy rain and storms, the system was able to successfully track all the targets involved in the trials,” said the firm. 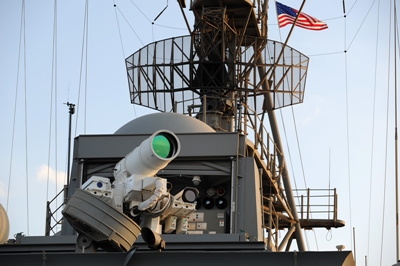 “During night trials, the demonstrator proved capable of acquiring and tracking targets even under conditions of poor visibility. In other experiments, the laser team simulated a defense against a swarming attack, which required rapid switching between targets approaching from different directions.”

That demonstrator was integrated within a standard container and equipped with a fast 360° beam guidance system. “Sophisticated” mirror optics are said to be capable of harnessing higher laser power levels than those used so far.

Since 2014 the US Navy has been testing a laser weapon on board the USS Ponce, a transport ship, as it patrols the Persian Gulf (shown right). The system, believed to employ a 30 kilowatt laser, has been shown destroying drones and burning holes in boats – and according to one report has been authorized for use in self-defense.