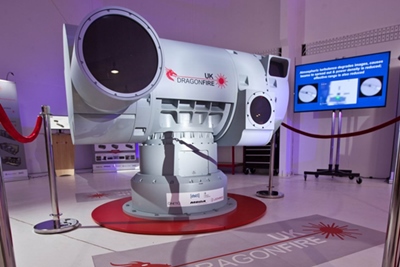 The UK’s Ministry of Defence (MOD) says it plans to spend “up to” £130 million developing three new directed-energy weapons – including both laser and radio-frequency systems.

According to the MOD, the plan is to trial the technologies at sea and on board army vehicles in 2023. The “prior information notice” call comes two years after it awarded a £30 million development contract to the “Dragonfire” laser weapon consortium led by missiles firm MBDA Systems.

The department adds that it will set up a dedicated new Joint Programme Office and recruit program managers, as part of the latest investment.

Global race
Powered solely by electricity and operating without ammunition, laser and other directed energy weapons offer the potential to revolutionize warfare. The systems can be fuelled by a vehicle’s engine or a generator, significantly reducing operating costs and providing unprecedented flexibility, says the MOD.

While laser weapons could be used to destroy enemy drones, missiles, or artillery at significant stand-off distances, RF systems could disrupt and disable an adversary’s electronics and computing power.

Similar programs to the UK’s are already under way elsewhere, and appear to be at a significantly more advanced stage in the US. Following earlier tests of a 30 kilowatt system on the USS Ponce, the USS Preble is now set to become the first US Navy destroyer to be equipped with a high-energy laser, with installation expected in 2021.

Last year, the US military awarded key contractor Lockheed Martin nearly $1 billion in potential funding to develop two high-power laser systems – one to be deployed at sea and a second for use on land. Meanwhile, Dynetics is heading up a team to build a 100 kilowatt laser weapon for the US Army.

Having initially laid out plans to deploy such technologies in the “mid-2020s”, the MOD now says it wants to accelerate their introduction onto the battlefield.

Dragonfire tests due this year
The UK government’s Defence Secretary Penny Mordaunt said: “Laser and RF technologies have the potential to revolutionize the battlefield by offering powerful and cost-effective weapons systems to our armed forces.

“This significant investment demonstrates our commitment to ensuring our armed forces operate at the forefront of military technology.”

Navy ships and army vehicles will use the planned exercises to gain a better understanding of technologies, test the systems to their limits, and assess how they could be integrated with existing platforms.

Part of the MOD’s “Novel Weapons Programme”, the laser systems are currently expected by the UK government department to reach the front line within a decade.

The Dragonfire demonstrator, commissioned by the UK’s Defence Science and Technology Laboratory (DSTL), is built around QinetiQ lasers and a beam director designed by the UK division of Leonardo. It is due for field tests later this year.

The MOD describes that system as a “world-first” in laser weapons technology, combining multiple laser beams to produce a weapons system said to be more powerful than its predecessors and resistant to the most challenging environmental conditions.