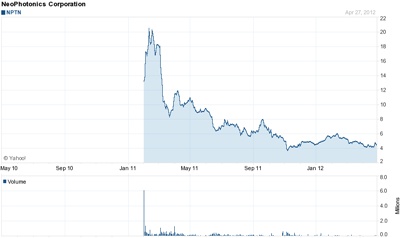 The fund, which has previously invested in a number of other photonics companies, including IPG Photonics via its subsidiary IRE-Polus, paid close to $40 million for just under five million newly issued shares in NeoPhotonics – equivalent to around a 17% stake.

The premium is significant: at $8 per share, Rusnano paid close to double the market price of the San Jose company’s stock, and the vote of confidence sent NeoPhotonics’ share price up by nearly 10% in early trading on April 30, to approximately $5.

Emerging markets
Rusnano’s managing director Sergey Polikarpov, who joins the NeoPhotonics board of directors following the investment, said in a statement:

“[NeoPhotonics’] planned research and production facilities in Russia are intended to be able to perform a wide range of steps from PIC development to processing and fabrication. We believe that with our support in Russia, we can further enhance the company’s development cycles and shorten the time for broader adoption for NeoPhotonics products in Russia and the global market.”

That relates to the proliferation of fiber-optic communications around the world, from fiber-to-the-home deployments in China to the needs of emerging economies in the former Soviet bloc. Tim Jenks, NeoPhotonics’ CEO, commented:

“We welcomed this investment as it aligns with our strategy to accelerate growth globally, with particular emphasis on fast-growing and emerging markets, including in Russia and the CIS [Commonwealth of Independent States] countries.”

“Not only are these markets deploying high-speed, agile and fiber-to-the-home networks but we are also seeing more of our customers target service providers and invest locally in Russia and more broadly in eastern Europe,” Jenks added.

“We started to see and investigate this growth opportunity several years ago, and we added sales capability in the region and have since been engaged with and supplying several customers in Russia. With the planned support from Rusnano, we believe that NeoPhotonics is well-positioned to capitalize on new and greater opportunities in the region.”

$10 billion fund
Rusnano is a $10 billion equity fund backed by $5 billion from the Russian government and $5 billion raised on the money markets, and it has invested in several private equity and venture groups, as well more than 140 companies directly, in the five years since its inception.

Prior to the NeoPhotonics deal, Rusnano had already invested in a large number of photonics-related companies and projects, spanning a range of applications from biophotonics to displays.

To date, the fund’s largest commitment to a single company was a $700 million investment in displays innovator Plastic Logic, signed in January 2011. That deal will see Plastic Logic build a huge production facility in Zelenograd, Russia.

Other, smaller-scale, investments include a $50 million stake in IRE-Polus, a subsidiary of the fast-growing fiber laser company IPG Photonics. IRE-Polus was in fact the origin of IPG, which is now listed in the US and worth in excess of $2 billion. IPG is expanding its facilities near Moscow as a result of that deal.

In the biophotonics sector, Rusnano portfolio companies include Hemacore, which is developing a technology for diagnosing blood clots, using a combination of red and ultraviolet light, and time-lapsed CCD imaging of scattered light.

And in March 2011, Rusnano led a $9 million series B round of financing raised by Colorado-based BiOptix. The Boulder firm, which is developing disposable biosensors based on surface-plasmon-enhanced interferometry for applications in biomolecular kinetic analysis, was the first US company in which Rusnano had invested directly.