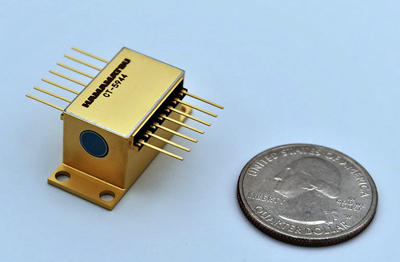 Wavelength-swept QCL only 1/150th the size of Hamamatsu’s previous QCLs.

By leveraging its expertise in micro electromechanical system (MEMS) and optical mounting technology, Hamamatsu Photonics has developed a tiny wavelength-swept quantum cascade laser (QCL) in a footprint that is just 1/150th that of its previous QCL products, the company says.

Combining the new QCL with a drive system developed by Japan’s National Institute of Advanced Industrial Science and Technology (AIST) is intended to help achieve high-speed operation and simplify the peripheral circuit design, to allow the QCL to be mounted into equipment as a light source in portable analyzers. This will make the analyzers small and lightweight enough to carry anywhere, says Hamamatsu.

The development project also aims to increase analyzer sensitivity for detecting sulfur dioxide (SO2) and hydrogen sulfide (H2) as well as simplifying maintenance. Doing so, will allow its use in applications for stable long- term monitoring of volcanic gas components near the craters of volcanoes. Other promising applications include detecting toxic gas leaks in chemical plants and sewers as well as making atmospheric measurements.

Techniques for predicting volcanic eruptions usually rely on monitoring the concentration of SO2 and H2S in volcanic gases that tends to rise a few months before an eruption. Most research institutes therefore currently utilize gas analyzers with an electrochemical sensor that detects target gases by way of electrodes. Researchers install these gas analyzers near volcano craters to analyze those volcanic gas components in real-time.

However, since the electrodes of the electrochemical sensors are in close contact with volcanic gases, their performance deteriorates causing a short service life. These sensors therefore require constant maintenance including part replacement, which makes it difficult to perform stable long-term monitoring. 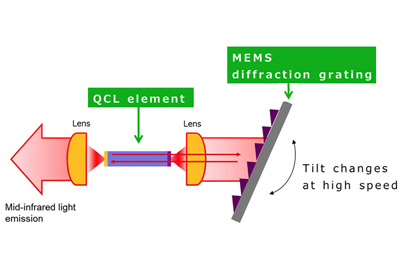 Principle of of operation of new wavelength-swept QCL.

To solve this problem, from 2020 as a part of the “Development of sensing technology for detecting extremely weak signals to realize an IoT society” project supported by NEDO, Hamamatsu and AIST have been developing a next-generation volcanic gas monitoring system that is an all-optical compact.

Hamamatsu had the role of designing a miniaturized light source for gas analyzers. The new smallest wavelength-swept QCL can emit mid-infrared light, while changing its wavelength at high speed in a range from 7 µm to 8µm. Combining this new QCL with a drive system developed by AIST will help achieve high-speed operation and simplify the peripheral circuit design, allowing it to be mounted into portable analyzers as the light source.

The project is also researching how to increase analyzer sensitivity and minimize maintenance with the aim of stable long-term monitoring of volcanic gases near volcano craters. Other promising applications include detection of toxic gas leaks in chemical plants and sewers as well as atmospheric measurements.