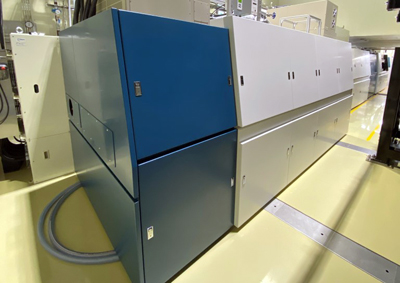 Hamamatsu Photonics has developed an industrial pulsed laser system that produces a pulse energy of 250 J, which the company says is the world’s highest energy among LD-pumped lasers. The development of this laser system stems from the “Research and Development of Next Generation Laser Processing Technology” project supported by the NEDO, which is a national research and development agency in Japan.

The new laser system boosts the energy storage capability of the laser medium as well as beam quality to deliver more than double the energy amplification capability while still maintaining the same size as currently available industrial pulsed lasers.

The company announced this achievement at the NEDO booth during this week’s OPIE ’21 (Optics & Photonics International Exhibition 2021), held at the Pacifico Yokohama (Nishi-ku, Yokohama, Japan) between June 30th and July 2nd 2021.

Hamamatsu has been developing high-power pulsed laser systems as part of the “Development of Advanced Laser Processing with Intelligence Based on High- Brightness and High-Efficiency Next-Generation Laser Technologies (TACMI Project)”, supported by NEDO. In 2019, it produced a pulse energy of 117 joules by using four LD modules that were manufactured in-house and two laser amplifiers, each equipped with six ceramic laser mediums.

The company stated, “We have continued efforts to further boost the output power and succeeded in creating an industrial pulsed laser system that delivers a pulse energy of 250 joules. At the same time, using this new laser system, we also evaluated basic conditions essential for designing a 1 kJ class laser, which will prove an important milestone in laser technology development, and we have confirmed that it is practical and achievable.”

The company explained how its 250 J laser system has approximately double the light energy storage capacity [compared to previous models]: “We achieved this by installing a laser medium composed of 10 ceramic disks, each with the world’s largest surface area optimized for a laser medium,” said this week’s announcement.

“We also reassessed and revamped the amplifier design and utilized eight of our newly designed compact LD modules mounted at ideal irradiation angles and positions. Doing this increased the pumping efficiency to the laser medium and improved the pumping capacity to about twice that of the previous system. Yet even with such high power it is still just about the same size as currently available industrial pulsed lasers.”

Looking ahead, Hamamatsu described its future approaches thus: “In cooperation with the TACMI Consortium, Hamamatsu and NEDO will proceed with building up a database that integrates laser processing-machining experiments and data acquired from using this new laser system. Hamamatsu Photonics will also continue research work aiming at making the 1kJ industrial pulsed laser system a reality.