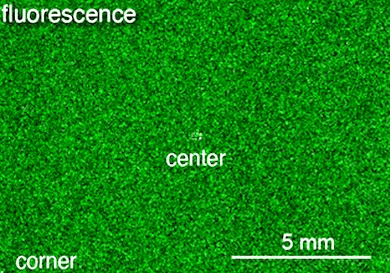 An optical imaging system designed to capture an unprecedented number of cells in a single image could help reveal the cellular dynamics underlying complex biological systems.

Developed at Osaka University's Transdimensional Life Imaging Division, the technique combines an ultra-high pixel camera and a large lens to capture what the team calls "one in a million" situations. The work was published in Scientific Reports.

Termed AMATERAS, from "a multi-scale/modal analytical tool for every rare activity in singularity," the technique is a tool for the simultaneous observation of centimeter-scale dynamics of multicellular populations, with micrometer resolution to see the functions of individual cells, according to the project.

"Conventional biological microscopes can observe at most 1,000 cells, with a field of view limited to a few millimeters," said Osaka's Taro Ichimura, who commented that the new setup uses machine vision, powered by a high-pixel camera with a macro lens.

The project's design philosophy involved tackling the factors that normally limit the number of observable cells in a microscopy field of view, including the diameter of the area in the image plane that can be observed through the eyepiece, and the pixel size of the CMOS sensors commonly used.

A platform in which the image sensor is larger than the observable diameter in the image plane is one route to making more cells observable, but an increase in pixel size would itself lead to a loss of resolution.

"We adopted a CMOS image sensor which has a 35 millimeter diagonal size and a pixel size of 2.2 microns, hence the number of effective pixels can reach 13,264 × 9180, which is one of the largest number of pixels among available CMOS image sensors," commented the team in its paper.

The sensor is employed alongside a telecentric low-power 2× lens designed for machine vision with a numerical aperture of 0.12, which theoretically provides an optical resolution of about 2 microns - sub-cellular spatial resolution without a high magnification lens.

This combination of a 120-megapixel camera and a telecentric macro lens provides a large field of view, up to about 1.5 x 1.0 centimeters, "wide enough to observe one million eukaryotic cells" according to the team, while still resolving individual cells and the interactions between them.

The project has termed the imaging technology "trans-scale scope," to indicate that the technology can be applied to imaging from the micrometer-scale to the centimeter-scale.

The AMATERAS platform was tested by dynamically imaging calcium ions in cultured HeLa cells, using high-brightness LEDs with four different emission colors for fluorescence excitation, and looking for a phenomena termed "spontaneous calcium ion pulsing" described in prior HeLa studies. The technique successfully detected that these anomalies were occurring in less than 0.01 percent of specimens.

Examination of mouse brain slices then demonstrated the "trans-scale" observation of a biological specimen, through multi-color imaging of centimeter-wide sections followed by enhanced magnification of areas of interest. "Any specific region can be zoomed in to see the local distribution of cells at a single-cell resolution as if it were a Google map," commented the project in its paper.

After these proof-of-principle tests, the imaging architecture could now accelerate research in a range of fields that deal with large cell populations, such as neuroscience, oncology, and immunology.

"Our trans-scale scope system AMATERAS is expected to contribute to a wide range of applications, from basic research for understanding the operating mechanism of multicellular systems, to medical applications such as the quality control of artificial cell sheets," commented Osaka University's Takeharu Nagai.