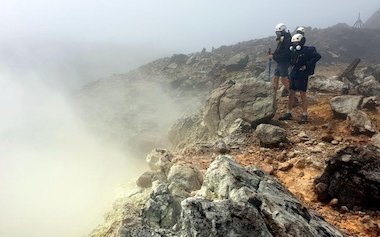 Monitoring of volcanic activity is essential for better understanding and prediction of significant and potentially disruptive volcanic events, but the equipment deployed has to be able to survive the environment.

Recording seismic activity in real-time represents a particular challenge, both in terms of discriminating between different sources of seismic waves, and in the design of an instrument able to perform in active volcanic settings without breaking down.

A team from France's ESEO graduate school of engineering and the University of Le Mans has now reported results from what it believes to be the first high-resolution optical seismometer placed on an active volcano, the fruits of a project to specifically design an instrument robust enough for the task. The data was published in Seismological Research Letters.

The instrument is located on Guadeloupe's La Grande Soufrière volcano, which has become increasingly active since 2018 and where previous eruptions have caused evacuations in Basse Terre, capital of Guadeloupe.

"Today's standard instruments cannot last very long when exposed to the high temperatures and the billowing, sulfurous, acidic gases near a fumarole," commented the project, referring to the openings through which hot gases emerge when a volcano is stirring. "Conventional gear may also not be accessible for emergency deployment, or repair, even in pre‐eruptive phases."

Original analog seismometers relied on some form of damped suspended weight, which registered any motion of the ground through a change in displacement. Calculations involving the damping stiffness and the seismic mass allowed the ground motion to be calculated accurately.

Modern optical seismometers employ forms of interferometry, based around optical fiber components such as Fiber Bragg Grating resonators. These allow the acceleration of the ground to register as a change in the strain signal from the FBG sensor, an approach potentially more sensitive than analog methods.

Such designs are also more suitable for networking across large areas of interest, and can be monitored by researchers located some distance away via optical fiber.

"The sensor is a purely opto‐mechanical geophone that is interrogated through a 1.5-kilometer fiber‐optic cable by a remote, and thus it is a much safer optic‐electronic system down the volcano’s flank," commented the project team in its published paper.

Activity of the plumbing system

The instrument on La Grande Soufrière has now survived for nine months in position at the 1,467-meter summit, recording small seismic events within the volcano less than 2.5 kilometers below the peak, along with seismic waves from a regional earthquake and one further afield in Chile, according to the researchers.

Development of a suitably hardy instrument has been underway for more than a decade, as part of research christened the High Performance Seismometer (HIPERSIS) Project, managed by the French National Research Agency (ANR).

HIPERSIS built on previous ANR research into a high-resolution optical seismometer prototype, which ultimately yielded an instrument based on a 2-Hz commercial geophone and on Fabry-Pérot interferometry operating on a 3-kilometer optical cable.

In particular, the current project tackled issues relating to ultimate commercial suitability of the instrument, aiming to reduce the device's size and increase its resistance to high temperatures of over 250 degrees. This required "new coupled designs in the mechanics, optics, and algorithmics," according to HIPERSIS.

Having proven its robustness on La Grande Soufrière, the new platform could now allow seismometers to be positioned in locations that were not previously practical, offering more insight into microseismic events under a volcano's dome. Ultimately a more detailed glimpse of "the fumarole signature, which helps to constrain the geometry and activity of the plumbing system of the dome," will be possible, according to lead author Romain Feron.

"Such an optical seismometer, as well as a variety of other geophysical sensors built on the same principle, can be installed in a wide variety of sites with fibers up to 50 km long," said Feron.