Laser-based quantum gravimeter under development at µQUANS scheduled to be field-tested on Europe’s biggest volcano in June 2020. 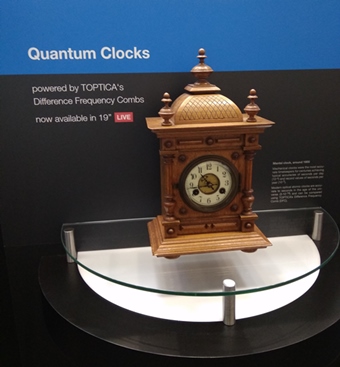 The tech behind quantum tech

A new field version of a quantum gravimeter based around telecom-grade photonic components is scheduled to travel to Mount Etna next year, helping volcanologists predict when Europe’s largest active volcano might next erupt.

Speaking during an application panel session at LASER World of Photonics dedicated to emerging applications in quantum technology, Bruno Desruelle from the Bordeaux, France, company µQUANS said the system should be able to detect changes in gravity caused by the movement and build-up of magma inside the volcano.

Telco-grade laser cooling
Based around telecom-grade 1560 nm laser diodes that are frequency-doubled using a robust micro-optical bench and an all-fiber design to produce the appropriate wavelength for cooling atoms, the current fridge-sized system is said to be the only commercial quantum gravity sensor currently available.

It calculates gravity by measuring the acceleration of the laser-cooled atoms in free-fall, picking up the minute changes in gravity caused each day by the Earth’s rotation and over each month by the orbit of the Moon.

CEO Desruelle, a graduate specializing in Bose-Einstein condensates while studying at Alain Aspect’s laboratory in University Paris XI, said that the company had now sold two of the gravimeters, and was targeting applications including hydrology, defense, and civil engineering – for example detecting sink-holes, tunnels, and voids.

Adapting that first-generation system to develop a field-deployable version has thrown up further challenges in terms of the mass, power consumption, and size required – as well as operating over the wide range of temperatures likely to be encountered.

One of the other key photonics technologies inside the gravimeter is a hollow pyramid retroreflector, while Desruelle says that the system is entirely turn-key in nature, with no quantum physics skills required by operators.

Wrapping up his talk in a packed session on the trade show floor, Desruelle said that if all goes according to plan, the first deployment of the field gravimeter should take place on Etna in June 2020.

Quantum tech ‘here to stay’
Elsewhere in the quantum technologies session dedicated to developments in sensors and computing - moved to the show floor to encourage stronger interaction with the photonics industry - Dana Anderson from the US-based ColdQuanta had three key messages for delegates to take home when it came to the unfolding quantum revolution.

“Quantum is here to stay – despite the considerable hype,” he said, holding up timekeeping applications in quantum optical clocks as a “harbinger of quantum technology”.

Anderson added that developments were now largely a matter of engineering, with photonics technologies set to provide many of the supporting components that will make quantum applications not just possible, but practical.

“If you are not at the quantum limit, you will not be competitive,” he added, before wrapping up with his final message – that the current state-of-the-art in quantum was primitive, equivalent to the very first transistors in relation to the computing revolution that followed.

Opening the panel session, Frank Schlie from Germany’s Ministry of Education and Research (BMBF) remarked that governments and funding agencies around the world have been sufficiently seduced by the promise – or perhaps threat – of quantum technology that they are investing some $15 billion globally on its development. That figure came from Sir Peter Knight, who gave a plenary talk on the topic at the accompanying LASER Congress.

Schlie also warned that with the field still in the early stages of working out exactly which quantum applications might reach commercial fruition, it would be important to manage expectations in that regard.

Germany has itself committed €650 million to quantum technology development for the 2018-2022 period, and only at the end of that time will the various political agencies in the country seek to decide which applications look realistic for subsequent development. 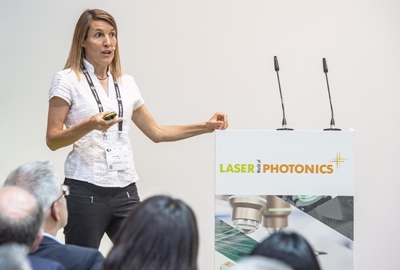 Brain-machine interface
Bosch senior scientist Tino Fuchs did at least give an indication of what the world’s largest MEMS manufacturer thinks will become commercially significant in the future. He described two sensor devices, both utilizing lasers, that the company sees as promising.

One is a diamond-based optical magnetometer that could ultimately find use as a “brain-machine interface”, the second a nuclear magnetic resonance gyroscope capable of detecting Faraday rotation of light. Fuchs and his colleagues see potential applications for the devices, which need both 795 nm and 980 nm lasers, in future autonomous vehicles for back-up navigation systems.

“Quantum technology will strengthen Bosch’s leadership in the sensor market,” he predicted. “The connection to academia is very important, as is that to quantum technology companies. That’s why I am here.”

The popular panel session also heard from Svenja Knappe, co-founder of new startup FieldLine. Knappe and colleagues are working on another sensor capable of measuring electrical currents in the brain non-invasively - potentially helping to answer philosophical questions such as why we dream, sleep, and laugh.

Wrapping up the session, Stephan Brakhane from Toptica Photonics reported on solid progress under the “Opticlock” project, a €6 million industry-led collaboration to build a portable ytterbium ion clock that uses photonics kit from Menlo Systems and HighFinesse, alongside Toptica itself.

The team is in the process of assembling the optical clock as a series of standard 19-inch rack units, with Brakhane telling the panel that, so far, the various components have each been integrated on schedule.