PACT creates in vivo 3D functional imaging of the brain 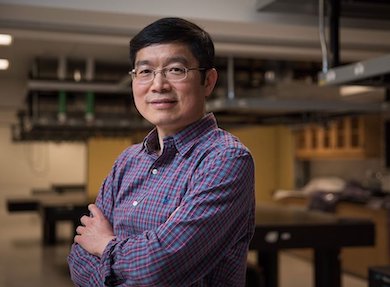 Photoacoustic computed tomography (PACT) builds on the principles of photoacoustic imaging to create images of blood vessels and angiographic structures.

The technique uses non-ionizing laser pulses to briefly heat up an absorbing target before allowing it to cool, causing an expansion that in turn creates an ultrasound signal. That signal can then be reconstructed in a manner analogous to functional MRI, generating an image showing the distribution of optical absorption inside the target.

In particular, PACT can reconstruct vasculature through the different optical absorption of oxy- and deoxyhemoglobin, an advantage over an MRI technique.

Past breakthroughs by Lihong Wang, one of PACT's key pioneers, have included applications of the technique to breast cancer examination, small animal studies, and ways to maximise the useful information extracted from the inherently weak photoacoustic signals. However, PACT of the human brain has not been achieved until now.

The latest research by Wang's Caltech research group has been a demonstration of massively parallel functional photoacoustic computed tomography of the human brain, indicating that the technique could be a valuable way to monitor blood concentration and oxygenation changes during brain activity. The work was published in Nature Biomedical Engineering.

"In breast imaging you just want to see blood vessels, because they can reveal the presence of a tumor," commented Lihong Wang. "But the functional change in imaged brain activity is only a few percent change in the baseline signal. That's more than an order of magnitude harder to measure."

The project's PACT platform was designed specifically to address challenges of field of view, sensitivity, resolution, and ergonomic comfort for the patient being examined. A dual wavelength laser module at 1064 and 694 nanometers excites PA waves from both oxy- and deoxyhemoglobin, while four hemispheric ultrasonic transducer arrays of 256 elements each record the signals generated.

The data from the 1,024 total sensors are then assembled by a computer algorithm into a 3-D map of blood flow and oxygenation throughout the brain.

In trials, the Caltech group found that its massively parallel ultrasonic transducer arrangement allowed PACT to produce tomographic images of the brain with a 10-centimeter-diameter field of view, an imaging depth of around 1 centimeter, and spatial and temporal resolutions of 350 microns and 2 seconds respectively.

Although the technique is presently limited to imaging the superficial cortex, it can potentially monitor the resting-state dynamics in at least portions of all of the brain's major networks through their nodes in the cortex, according to the project.

These results persuade the project team that the technique "is likely to be a robust, powerful and practical tool for human neuroimaging in future," thanks to its potential to be more simple, inexpensive and compact than MRI examinations. However, a number of practical challenges will first have to be tackled, including the effects of the hair and scalp.

"A hurdle we still need to overcome is the skull," said Wang. "It's an acoustic lens, but it's a bad one, so it distorts our signal with attenuation as well. It's like looking outside through a wavy window."

For the purposes of the current trial, the project had access to patients who had experienced traumatic brain injury and undergone a decompressive hemicraniectomy, removing part of the skull as a potentially life-saving procedure. A longer-term solution to the problem could be the development of next-generation reconstruction algorithms that account for the skull's acoustic heterogeneity.

The current findings already establish the use of photoacoustic computed tomography for human brain imaging, however, and the project believes that PACT can play a major role in imaging and treatment of the brain.

"Neuroimaging is central to the development of new treatment paradigms," commented project member Jonathan Russin, associate director of the USC Neurorestoration Center. "This demonstration is a very important step toward developing an impactful new tool to complement current approaches such as MRI-based techniques."