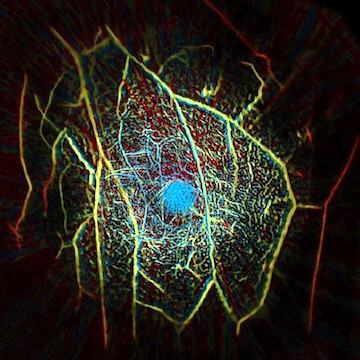 A photoacoustic computed tomography (PACT) platform developed by Lihong Wang's group at Caltech is said to mark a significant step towards ultimate clinical viability of the technique for breast cancer screening.

The system is able to scan an entire breast in 15 seconds, within a single breath-hold of the patient, overcoming one of the previous hurdles of PACT as a potential clinical technique and speeding up the test sufficiently to minimize patient discomfort. The study was published in Nature Communications.

"This is the only single-breath-hold technology that gives us high-contrast, high-resolution, 3-D images of the entire breast," said Wang, a pioneer of photoacoustic techniques at Washington University in St Louis before moving to his current base at Caltech.

PACT involves the use of non-ionizing laser pulses to rapidly, and very briefly, heat up an absorbing target for a short instant of time before allowing it to cool, causing an expansion that in turn creates an ultrasound signal. That signal can then be reconstructed to generate an image showing the distribution of optical absorption inside the target.

The technique is particularly suitable for assessing the optical absorption of endogenous chromophores, including oxygenated and deoxygenated hemoglobin, making it an attractive way to accurate determine the margins of suspected cancerous tumors. However, certain limitations have until now been problematic, according to Wang.

"Capitalizing on the optimized illumination method and signal amplification, SBH-PACT achieves sufficient noise-equivalent sensitivity to clearly reveal detailed angiographic structures both inside and outside breast tumors without the use of exogenous contrast agents," commented the team in its published paper.

"SBH-PACT features a deep penetration depth - 4 centimeters in vivo - with high spatial and temporal resolutions of 255 microns in-plane resolution and a 10 Hz 2D frame rate. By scanning the entire breast within a single breath-hold of around 15 seconds, a volumetric image can be acquired and subsequently reconstructed utilizing 3D back-projection with negligible breathing-induced motion artifacts."

In a pilot study, SBH-PACT was used to image eight patients of differing breast sizes and skin pigmentation. The technique identified eight out of nine biopsy-verified tumors present by assessing blood vessel density, without the need for ionizing radiation or exogenous contrast agents. The ninth, and initially undetected, tumor was subsequently revealed by elastographic SBH-PACT, in which the tissues are subjected to suitable strain during PACT assessment - another advantage of a short acquisition time, noted Wang.

The next steps could involve using PACT for imaging other parts of the body, such as assessing vascular tissue in the extremities of a patient with diabetes, as well as clinical translation for breast cancer screening.

"Our goal is to build a dream machine for breast screening, diagnosis, monitoring, and prognosis without any harm to the patient," commented Wang. "We want it to be fast, painless, safe, and inexpensive."